2 Can a Wooden Bike Be Eco-Friendly? Pardee Seems to Think So

Not all bikes are created equal, but when the budget is limitless, you can ask for the best of the best. The Festka Porcelain Spectre is just that, with an extra touch of exclusiveness and artsy aspirations.

The Festka Porcelain Spectre Is a $35,000 Art Piece and Mighty Road Bike

While we’re accustomed to having art displayed at galleries or on one’s own walls, Porcelain is a one-off masterpiece, delivered to its proud owner in Bangkok in late 2019. It is the result of 13 months of hard work by Czech-based frame builder Festka and local artist Michal Bacak, with the client overseeing every step of the process.

A lot can be said about some people’s need to get custom everything. After all, is a regular but expensive bike not as good as a custom bike? It can be, that’s for sure. Then again, if you can afford custom, you might as well get custom.

In terms of premium bicycles, you can’t go wrong with a Festka carbon composite frame. The maker sells about 200 units a year, 95% of them outside the Czech Republic, and clients include high-profile figures like Orlando Bloom and billionaire Suratchaj Chenyavanij. Chenyavanij is also the owner of the Porcelain bike, which he commissioned as a one-off way to combine his love of cycling, fine porcelain, and his family.

Chenyavanij is an executive at Thai contract cleaning company NAP and, back when he ordered Porcelain he had more than 40 high-end bikes, many of them custom. He has them displayed around his home, but contrary to what you might believe, he doesn’t just hoard them: he rides them, and he rides them often and hard like they’re meant to.

The porcelain frame, stripped of wheels and handlebars, was featured on his social media. At first, Chenyavanij displayed it on a stand in his bathroom, which may sound sacrilegious, but wasn’t that much. He also used it as a centerpiece for a game table, and on both occasions, he made sure to show it off to his followers on social media.

Hopefully, he also rode the Porcelain because it’s a competent, tough, carbon road bike despite its name and its apparently fragile appearance. A $35,000 road bike, but one nonetheless.

“I have many custom bikes, but only now I see what custom really means. Festka has surpassed all my expectations,” Chenyavanij said when he took delivery of Porcelain.

At the end of those 13 months, Bacak had turned the white frame into something looking like fine porcelain combining porcelain designs and motifs from Portuguese Azulejo and English Churchill Blue Willow to tell the owner’s life story. The frame was decorated in cobalt blue and real 24k gold, with all the designs done by hand after pre-approval by the owner.

From a distance, the Porcelain design might look like random patterns punctuated with gold accents. In reality, it tells its rider’s story, including details about his family like his children’s names, his love of travels and cycling, as well as other hobbies. It is, truly, a detailed account of his personal life, if you can get close enough to read it.

It’s not just the hand-painted frame that makes Porcelain stand out, either. An SRAM Red AXS eTap wireless 2×12 groupset with integrated Quarq power meter provides the drivetrain. Still, all logos were removed, repainted, and redesigned so they would fit in with the bike’s aesthetic. Porcelain also features custom painted carbon stem and saddle, ceramic bearings, drum brakes, and Lightweight Fernweg wheels.

The Porcelain is a one-off that will never again be replicated, Festka said at the time. If money is not an issue, you could still get something special: this bike was based on the Spectre frameset, which starts at €4,000 (approximately $4,900 at the current exchange rate). For upwards of $10,000, you get what Festka calls the “perfect” bike. Clearly, for $35,000, you can get the bike of your dreams, screaming exclusivity and artiness. 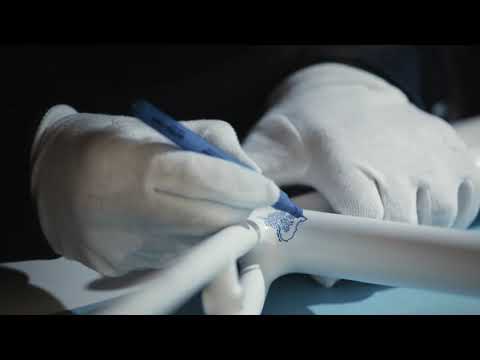