1 From Enzo to Daytona SP3: How Ferrari’s Most Powerful V12 Evolved Through the Years

Last month, the Maranello-based carmaker revealed the Daytona SP3, a limited-edition model inspired by the 330 P4 racing prototype. However, it isn’t the first modern, road-legal Ferrari to pay tribute to an iconic endurance racer.

The Ferrari Daytona SP3 Is Cool, but the Bespoke P4/5 Has a Better Story

That distinction belongs to a bespoke one-off that was created fifteen years ago. Dubbed P4/5, this prancing horse-badged masterpiece didn’t come from Maranello but from Turin, where it was drawn up and put together by Pininfarina.

The collaboration between Ferrari and the legendary design company started in 1951 with a meeting at a small-town restaurant. Unlike today, when CEOs send entire delegations for such meetings, that afternoon, Enzo Ferrari, Battista "Pinin" Farina, and his 25-yer-old son, Sergio, were the only people who sat at the table. History has shown us that the meeting was extremely productive because, for the next 65 years, the vast majority of Ferrari’s road-going models were designed and engineered by Pininfarina.

One of those was the 612 Scaglietti, the all-aluminum grand tourer introduced in 2004. It seems that during its two-year development, the relationship between the two companies was put to the test since both had fundamentally different views about how the car should look like. That’s probably why the result was one of the most uninspiring Ferraris built in the last 20 years. This isn’t just my opinion. Many fans of the iconic carmaker felt the same, and some of them put the entire blame on the Pininfarina team, arguing that the designers had lost their touch.

In 2005, after thousands of negative reviews of the 612, styling director Ken Okuyama and his colleagues started toying with the idea of creating a unique Ferrari that would prove the doubters wrong. They drew up some sketches and eventually settled on one created by Jason Castriota. But, since they didn’t want to involve Ferrari in this secret project and the company was piling up huge losses, they needed someone to finance it. Several renown Ferrari collectors were discretely approached by Andrea Pininfarina, and with one exception, all of them politely refused.

This is where former film director James Glickenhaus came into play. The current owner of Scuderia Cameron Glickenhaus (SCG), a member of a wealthy Wall Street family, and a collector of historic racecars such as the oldest surviving Ferrari, he agreed to meet with Castriota and listen to his pitch.

The sketch he was shown seemed to borrow cues from the 1960’s endurance racers, mainly the P3/4, one of which he happened to own and absolutely adore. Initially hesitant about what he viewed as a drastically futuristic approach, Glickenhaus thought about it for several months and ultimately agreed to finance the project.

At the base of the P3/4’s spiritual successor was another Pininfarina creation, the Enzo Ferrari, the last unsold example in the world. It was sourced from a Beverly Hills dealership and sent to Turin, where its original body was stripped down.

By September, the final design was fully developed, a clay model began to take shape, and wind tunnel testing commenced. A few months later, new carbon fiber panels were being fitted to its monocoque.

In January 2006, Ferrari got wind of Pininfarina’s secret venture, and chairman Luca di Montezemolo paid them a visit. Everyone expected this project to spark a grudge match between the companies, but the boss was blown away by the car, agreeing that it deserved Ferrari badges.

Eight months and $4 million later, the P4/5 was revealed at the Pebble Beach Concours d'Elégance. With more than 200 bespoke components, it made everyone’s jaws drop. Sitting on bigger, 20-inch custom aluminum-alloy, center-lock wheels wrapped in Michelin Pilot Sport tires, it was deemed exquisite from every angle and fundamentally different from the Enzo in every way.

Inside, it used several elements from the car it was based on, like the dashboard and steering wheel, yet Glickenhaus himself designed the rest. These unique features include the seats, a tablet PC incorporated into the center stack, a new stereo system, improved air conditioning, as well as a custom-made, high-strength alloy roll bar.

The pushrod suspension and Brembo brakes remained unchanged, but thanks to an improved drag coefficient of 0.34 and the lighter body, Glickenhaus stated that it handled better than the original car.

Officially named Ferrari P4/5 by Pininfarina, this amazing one-off is what the Enzo should have looked like in the first place. It’s a masterpiece of Italian design and a gutsy throwback to one of the most beautiful race cars of all time. While I will let you decide whether it’s better-looking than the new Daytona SP3 or not, I think we can all agree that its story is far more interesting.

In the YouTube video below posted by BeTerrific, you can see more of this incredible car as its proud owner shows it off. 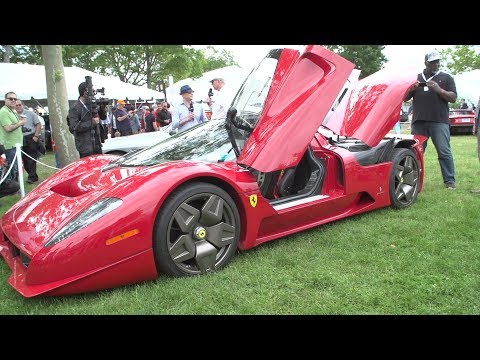