The Prancing Horse brand has kept itself busy during the final months of this very troubled year, presenting an entire roster of models that incorporate Italian words such as “Omologata,” “Modificata,” “Spider,” or “LEGO Technic.” Pardon us, the latter two are a bit more universal.
7 photos

Yeah, we got carried away citing all of Ferrari's latest achievements. It’s probably the brand’s well-known mojo that got us, frankly; or, perhaps, the string of announcements. We’ve seen the Portofino taking the Modificata moniker just prior to the arrival of the unique Omologata based on the 812 Superfast at the end of September.

Then November came, bringing us the most powerful drop top in the company’s history, the plug-in hybrid SF90 Spider, while just the other day we caught wind of a new LEGO Technic set based on the 488 GTE that’s going to be available January 1st, 2021.

Because the final month of autumn hasn’t wrapped up just yet, Ferrari thought it was a good idea to bring us yet another novelty. It’s yet another 488-based vehicle, although this time around it’s full size and looking forward to some fun track days during 2021.

The Ferrari 488 GT Modificata will be produced in very limited numbers (initially reserved just for drivers who previously took part in Competizioni GT / Club Competizioni GT events). It will arrive as an enhanced model taking the best elements from the already available 488 GT3 and GTE while also setting itself free from FIA’s regulations.

As such, the twin-turbo V8 has been taken to “around 700 ps” (690 hp), and also “benefits from completely revamped high-downforce aerodynamics,” As a result, it reaches a downforce of exactly 1,000 kg (2,205 lbs.) at 230 kph (143 mph). It goes without saying it can easily become entirely bespoke, as it “offers customers a wide range of customization options for both the exterior and interior.” 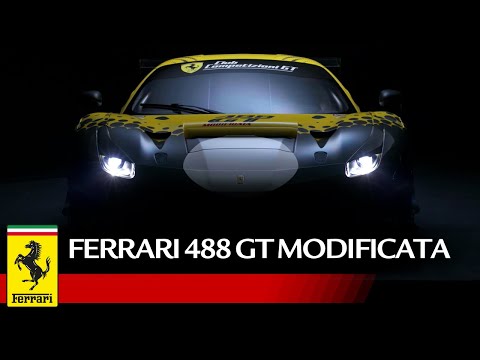