2 This 1960s Beauty looks Unmistakably Italian, Yet it was Assembled in the U.S.

4 Riding With the King: What Cars Did Elvis Have in His Garage?

An ultra-luxurious ride assembled in the U.S. by a company attempting to revive itself, the outrageous 1971 Stutz Blackhawk made a Rolls-Royce or a Bentley look like mundane sedans.

While most American carmakers were designing smaller and cheaper vehicles during the early-1970s, the Stutz Motor Company went the opposite direction by releasing a ginormous land-yacht that was one of the most expensive factory-built passenger cars available at the time.

The story of this long-forgotten manufacturer starts in 1911 when Harry C. Stutz and his friend, Henry F Campbell, founded Ideal Motor Company in Indianapolis, Indiana. Two years later, the business was rebranded Stutz Motor Car Company and for the next 26 years, it made a name for itself by producing some exquisite vehicles such as the Bearcat, Model M LeBaron, or Vertical Eight SV-16.

Although operation ceased in 1939, Stutz cars continued to inspire and fascinate enthusiasts during the decades that followed. Among these enthusiasts was New York banker James O'Donnell, who joined forces with retired Chrysler designer, Virgil Exner, and revived the brand in 1968 intending to create the most luxurious production car in the world.

So how do you turn such an optimistic goal into reality? The recipe was quite surprising as it started with ordering several second-generation Pontiac Grand Prix rolling chassis. However, the flamboyant bodywork and lavish interior - designed by Exner himself - were the special ingredients that would tingle the senses and blow the minds of the most demanding car enthusiasts.

After an initial prototype was built by Carrozzeria Ghia for no less than $300,000 ($2,173,825 today), another Italian coachbuilder called Carrozzeria Padane was commissioned to fabricate the bodies and ship them to Indianapolis.

The gauge steel structures were flawlessly handmade in Modena, and except for the required cutouts for the doors, hood, and trunk, there were no panel gaps.

Since Padane was also building bodies for several Italian carmakers, the Stutz Blackhawk would end up sharing its rear window with a Ferrari and door handles, seats, or gauges with a Maserati.

Nevertheless, the design was unmistakably American. Measuring more than 19 feet (5.79 meters) in length, it was a daring combination between modern shapes and classic cues inspired by the original Stutz models. The most notable example of this was a spare tire that protruded through the trunk lid or the optional (and non-functional) side exhaust pipes.

The interior was even more impressive. Everything was upholstered in Connolly leather, the steering wheel, dashboard, central console, and door panels were trimmed with genuine Birdseye maple or redwood, the carpeting was made from Australian lamb wool, and the trunk was lined with mink fur. Moreover, the gauges, buttons, or switches were plated with 24-karat gold.

In terms of convenience, the luxurious behemoth was equipped with bilevel automatic air-conditioning, a built-in liquor cabinet, or a high-end Lear Jet AM/FM eight-track quadraphonic sound system which, at the time, was the most expensive of its kind.

Unveiled in January 1970 at the Waldorf Astoria in New York City, the Blackhawk was an instant hit with the celebrities of the day. While the first Ghia-built prototype was kept by James O'Donnell, the pre-production car presented to the public was offered to Frank Sinatra on the condition that the artist would help promote the brand at the L.A. Auto Show. Sinatra declined, and Stutz subsequently made the same offer to Elvis Presley, who obliged and ended up with the car

Production commenced several months later, and by 1971, the extravagant machine could be had by anyone who could spare around $25,000. Counting inflation, that means $96,814 today, which is not enough for a Mercedes-Benz S-Class, let alone a Bentley or a Rolls-Royce. However, the average price for flagship models built by the aforementioned British carmakers didn’t exceed $20,000 in 1971.

Stutz manufactured around 600 units until 1987. Originally delivered with a 425-hp Pontiac 455-ci (7.5-liter) V8, it was continuously improved and subsequently equipped with various Ford and GM eight-cylinders.

Owned by the likes of Samy Davis Jr, Johnny Cash, Dean Martin, Elton John, Paul McCartney, or Al Pacino, the Stutz Blackhawk was the most extravagant series-production vehicle assembled in the U.S. during the 1970s and 1980s.

You can learn more about this amazing car in the video below posted on YouTube by Driving.ca. 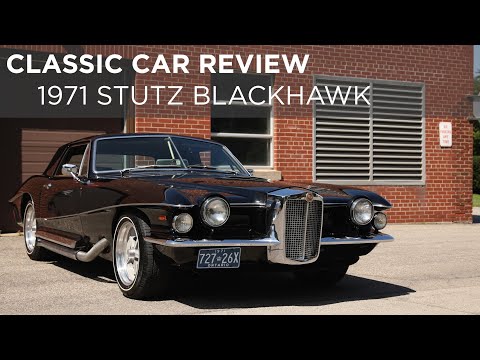