3 Anthénea Is a UFO-Shaped, Luxury Floating Pod That Can Sail the World

4 Dot Is an Old Ferry That Became a Gorgeous, Floating Palatial Home

5 Spitbank Fort Floating Fortress Could Be Your Very Own Villain’s Lair
Car video reviews:
Up Next

Dark Spiders on the Surface of Mars Rise From Underneath, Are Not Actually Creatures

These past couple of years, more than any before, have shined a spotlight on downsizing and its connection to a more-harmonious-with- nature lifestyle. Climate change is real and it impacts negatively all forms of life, including our own – and many believe going back to the roots would help with this.

The Exbury Egg, the Floating Home That Is Still Peak Downsizing

Put it simply, if you live in more harmony with the surrounding environment, your negative impact is minimized. By downsizing, you’re doing just that, and the consensus is that a tiny home or any other type of mobile habitat would help. It’s true, this desire for downsizing has prompted extremes like the emergence on the market of tinies with premium pricing and mansion-like amenities, but this is not the case here.

The Exbury Egg is a floating home that sits at the convergence of the downsizing movement, environmentalist awareness, and art. On the face of it, it’s a pretentious work of art that brings little functionality to the world at large, but in reality, it’s a livable home that floats and, more importantly to its creator, that aims to help us all better understand the effects of man on nature.

Created by artist Stephen Turner in 2013, with help from private sponsors and public authorities, the Exbury Egg was made by boat builder Paul Baker (Stephen Payne, designer of the Queen Mary 2, calculated the displacement of the egg-shaped boat-house) and architect Wendy Perring, with direct feedback from Turner himself. Turner, who later became known as Eggman because of his ambitious project, wanted a very specific thing: this had to be more than an art installation; it had to be good enough to serve as his self-sufficient home for the next 12 months.
Indeed, the Egg was towed to Beaulieu River, in Hampshire, UK, where it was tethered like a regular boat. It spend an entire year there, between July 2013 and July 2014, with Turner inside, who used it as his permanent home, office and research lab. As per Turner’s own statement, he wanted to study how the environment changed around the Egg and, at the same time, how the Egg responded and adapted to these changes.

The shell of the egg was made of reclaimed cedar wood and epoxy, measuring 6 meters (19.7 feet) in length and 3.5 meters (11.5 feet) in width. Inside, there was no running water or electricity, but Turner did have the basics to survive. There was a bedroom area, initially housing a hammock that was immediately replaced by a bed on an elevated platform at the “bow,” which had the benefit of offering additional storage underneath. The length of the Egg on one side was occupied by Turner’s workspace, where he monitored the cameras he’d set up on the perimeter, drew his drawings, and made observations that would later be posted on his dedicated blog.

The kitchen area was rudimentary at best, with a paraffin camp stove and a tiny sink, and improvised storage wherever there was space for it. There was also a charcoal-burning stove for heating up the place, which proved a life-saving feature during the rough winter that followed. A small bathroom with shower and toilet was also available. The only source of light was a porthole window on top, but it was enough to let Turner know when the day started. Wanting to live in perfect communion with nature, he had opted for no electricity, so for the 12 months he stayed there, he would wake up at sunrise and go to sleep at dawn.

He had some power, though, since he needed to document the experience. Four initial and then six solar panels in a nearby field generated electricity that was then sent through an underwater cable, to an inverter, and used to feed Turner’s cameras and laptop. His only regret at the end of the project was that he didn’t include a wind turbine, which would have prevented him from rationing his use of both during the winter months.

For the year Turner lived on the floating Egg, he did more than document the surrounding natural environment and whatever changes he was prompting in it. He made preserves, and made his own ink from whatever he could forage (blackberries, mostly), so he could continue drawing. He “fought” with molding, both black and green, which appeared as the Egg began leaking water from the roof and eventually took over everything, from the Egg itself to his clothes and even his teabags. He sent out 12 plastic egglets with surprises inside, to see where they would end up. He entertained occasional guests and, on rare occasions, spoke to the media via Skype.

“The ‘blueprint’ for the Exbury Egg, echoes its symbolism as a blueprint of life,” Turner said in 2014, at the end of the project. “Climate change is already creating new shorelines and habitats. […] Raising awareness of the past and the unfolding present of a very special location will be the task, whilst living in an ethical relationship with nature and treading as lightly as possible upon the land.”

His message echoed with many. The Egg won several industry awards, both for its environmentalist message and its capabilities as a proper home. For the next few years, the Egg traveled across the UK, being part of several other art installations. To this day, it’s still around: in 2019, Turner launched the international project Natura Prima?, which saw the Egg displayed on Thamesmead, London that same year, and in Venice, Italy, in 2020. In September 2021, Turner spoke about the Egg at the Art for Your World event for The Royal Society of Sculptors.

The egg, Turner says, is aesthetically and conceptually perfect. As it turns out, the egg is also a perfect home for those looking to downsize. 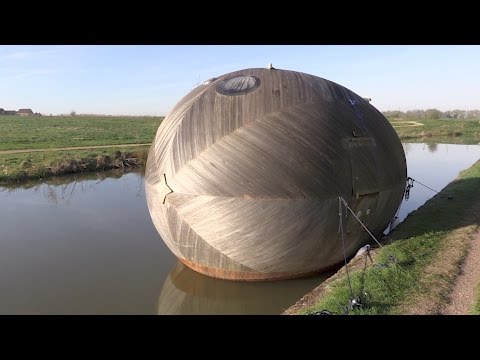 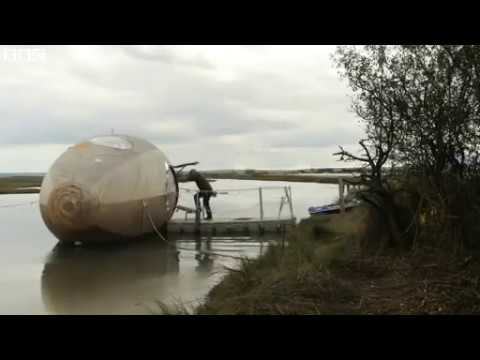