2 Custom Mustang X-1 Was Modeled After a Fighter Jet, LARPS as One Inside Air Force Museum

4 Meet Shorty, the Oldest Surviving Mustang and the Only Fastback Two-Seater Ever Built

5 Do Petrolheads go to Goodwood Instead of Heaven When They Die?
Car video reviews:
Coverstory

Whether it received factory-built upgrades or aftermarket components installed by enthusiastic owners, the Ford Mustang is one of the most heavily modified cars of all time. In this article, we take a look at a unique sixth-generation model created by Ford with help from Vaughn Gittin Jr. to honor the American pilots that fought for the UK’s Royal Air Force (RAF) in the Second World War.

The Eagle Squadron Mustang GT: Not Just a 700-HP Beast, But a Tribute to WWII Heroes

Between September 1940 and July 1941, several months before the U.S. officially joined the war, the RAF recruited American pilots and formed three squadrons that were initially operational for defensive duties. Thousands volunteered but only 244 made the cut and got to fly M.9 Masters, Hurricanes, or more notably, the legendary Spitfires.

Although they fought for the United Kingdom and held the ranks of RAF officers until September 1942 when they were transferred to U.S. Air Force, these brave pilots who were instrumental for the British war effort never renounced their citizenship, wearing uniforms that featured a patch with a white bald eagle and the letters "E.S." for Eagle Squadron.

To honor them and celebrate the 100th anniversary of the Royal Air Force, Ford Performance teamed up with two-time Formula Drift champion Vaughn Gittin Jr. and his company RTR Vehicles in 2018, creating a monstrous one-off Mustang.

Fittingly called Eagle Squadron, the rabid muscle car started life as a stock GT. Among the first upgrades it received was an aggressive RTR carbon fiber widebody kit that contained a front chin spoiler, a custom upper grille with integrated LED lights, and a Gurney flap that was added to the GT’s optional Performance Pack rear spoiler. To improve the car’s aerodynamics even further, the team responsible for the project also added several dive planes, splitters, and diffusers to the bodywork.

Everything was finished off with a matte camouflaged design contrasted by yellow trims inspired by the Spitfire Mk V EN783 aircraft that was part of the No. 71 Squadron, the first assembled by the RAF in 1940.

It stood on RTR Aero 7 two-piece forged wheels equipped with high-performance Nitto NT555 tires that measured 285/30 at the front and 305/30-ZR20 at the rear.

The cabin was also heavily customized with brown leather trims mixed with Alcantara, all contrasted by carbon fiber inserts. The Recaro bucket seats received embroidered Eagle Squadron logos, a tribute that was also engraved onto the shift knob. According to Ford, this component was made from melted-down metal sourced from an F-35 Lightning combat plane.

Another awesome feature was a hand-engraved plaque with the car’s name that was fitted on the right side of the dashboard. This element was made from a section of fuselage taken from an actual Spitfire used during the Second World War.

Under the hood, the GT’s stock 5.0-liter Coyote V8 received a supercharger kit, courtesy of Ford Performance, boosting its output from 460 hp and 420 lb-ft (569 Nm) of torque to a whopping 700 hp and 610 lb-ft (826 Nm) when fed with 93-octane fuel. The powerplant was linked to a Tremec six-speed manual upgraded with a short shifter and all that raw power was sent to the rear wheels through a heavy-duty rear axle.

The suspension system was improved with RTR adjustable sway bars and shocks from the Tactical Performance Package, combined with Ford Performance springs that lowered the car and helped it handle all those extra horses.

The bespoke Mustang made its debut on UK soil at the 2018 Goodwood Festival of Speed where Vaughn Gittin Jr. drove it on the Hillclimb track. This venue was chosen not just because it was located in Britain, but because Eagle Squadron pilots frequently flew over the Goodwood fields during the war.

It was then auctioned off at the Experimental Aircraft Association’s (EAA) annual Airventure held in Oshkosh, Wisconsin for no less than $420,000. It was bought by a gentleman named Brayton Williams who also earned an all-inclusive trip to the Woodward Dream Cruise.

The money was donated to the EAA’s Young Eagles, a program dedicated to giving kids and teenagers their first free ride in an airplane. Ford had sponsored the program for two decades, and this was actually the 11th car they built and sold to help the EAA raise money.

Apart from being one of the coolest ‘Stangs, we saw in recent years; the Eagle Squadron Mustang GT is so much more than just another insane build. It was created to honor the pilots who volunteered to defend Europe in the Second World War, raised money for a noble cause, and was designed with the help of a drift champion who drove it at the Goodwood Festival of Speed. How many custom-built cars have these feats on their resume? 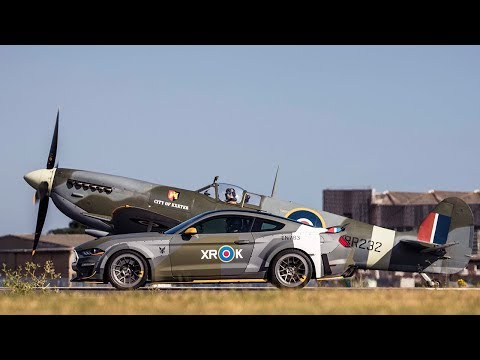