1 The BMW M3 Wagon Is Nearly Here, but We Almost Got One More Than Two Decades Ago

2 Now 19 Years Old, the BMW M3 CSL Remains One of the Best M-Badged Cars of All Time

4 BMW Brings Out the Only E31 M8 Ever Created, You Can See It Too

Whether it’s the 3.0 CSL, M1, or the very first M3, the vast majority of early BMW M models were created for both road and track supremacy. This trend changed during the 1990s when newer, more upscale M-badged cars, exclusively tailored for the street, started emerging.

Despite this new strategy that was employed to satisfy the market’s demand for upscale performance vehicles, modern iterations of the legendary M3 kept their connection to the motorsport world alive. Although the second and third generations were no longer homologation specials from the get-go, BMW M’s involvement in racing led to the creation of heavily-modified M3 race cars and, in some rare cases, road-legal conversions developed strictly for homologation purposes. Unquestionably the most famous member of this select group was the E46 M3 GTR Strassenversion (Street Version, in German).

In 2000, BMW introduced an all-new M3, and to boost its marketability in North America, the M division’s management decided to create a thoroughbred race version that would carry the torch from the E36 M3 GTR and compete in the American Le Mans Series against arch-rivals Porsche.

Early analyses determined that the production M3’s S54 inline-six was far from ideal for this endeavor, so rather than extensively modifying it, M engineers chose to exploit the lackluster rulebook and develop a new engine from scratch. The result was a lightweight, all-aluminum, naturally aspirated V8 with a dry-sump oiling system, flat-plane crank, four valves per cylinder, dual overhead cams for each bank, a strong, double-chain drive, and mechanical bucket tappets. Displacing 4.0 liters, the new unit dubbed P60B40 (or P60, for short) could make 444 hp (331 kW) at 7,500 rpm and 354 lb-ft (480 Nm) at 5,500 rpm.

With this engine under the hood and an extensively upgraded body, the new M3 GTR was ready in only a few months, but a big problem emerged. As BMW was testing the machine, rivals got wind of the project and complained to the organizing board, arguing that it shouldn’t be allowed to race in the GT class. They reasoned that the car was powered by a brand-new V8, so it was basically a prototype, not a production-based racer. As a result, the regulations were revised for the 2001 season, and manufacturers were now specifically required to build a low number of road-legal equivalents of the race cars.

Although annoyed, BMW complied with the changes and announced it would build ten street versions. Put together in record time, each car was equipped with the P60, but to meet emissions requirements it was detuned to 350 hp and fitted with a slightly different exhaust system. Moreover, unlike the race cars which used a sequential transmission, the street GTR’s engine was linked to a six-speed manual with a twin-disc motorsport clutch. Still, even in this tamer spec, the car could reach a top speed of 183 mph (295 kph).

Available only in a Titan silver metallic finish, the M3 GTR Strassenversion retained most of the unique exterior upgrades from the competition cars, like the carbon-fiber bumpers, vented hood, or roof. However, the wheels were 19-inch Style 67s from the conventional M3, and the adjustable rear spoiler of the race cars was replaced with a smaller, fixed version also fabricated from carbon fiber.

Inside, it looked more like the standard M3, borrowing the same dashboard, door panels, and center console. That being said, the regular seats were swapped with race-spec Recaro buckets, while the rear bench, radio, and climate control system were stripped off to reduce weight. All these modifications translated to a dry weight of just 2,976 lbs. (1,350 kg), 408 lbs. (185 kg) less than the regular M3.

A total of six cars were completed in 2001. Three of them were engineering development mules that were later dismantled, whereas the other three production-level units were kept by BMW and survive to this day as part of the carmaker’s classic collection.

The racing version of the car ultimately competed in the 2001 American Le Mans Series, helping BMW Motorsport win the GT class title. Unfortunately, the regulations were modified again for the following season and this time, a minimum of 100 street units were required for homologation. Unable to comply, BMW withdrew from the competition but continued to race the GTR in Europe until 2005. One of the cars entered by Schnitzer Motorsport managed to win the famous Nürburgring 24-hour race two times in a row, in 2004 and 2005.

While its motorsport success made it well-known among BMW enthusiasts, the E46 M3 GTR reached unparalleled levels of fame in 2005 when EA Games released Need for Speed: Most Wanted. The ninth installment of the hugely popular racing video game series featured a custom GTR finished in a now-iconic, blue-and-silver livery. Players start with the car, lose it in a race, then work their way up the rankings to get a chance to win it back. The game was a huge hit, and suddenly the M3 GTR became the dream car for millions of people.

For fifty years, the M division has given us some amazing vehicles. Many are better than the GTR in more ways than one, but none has done a better job of igniting a burning passion for BMWs inside the hearts and minds of both car fans and regular people. 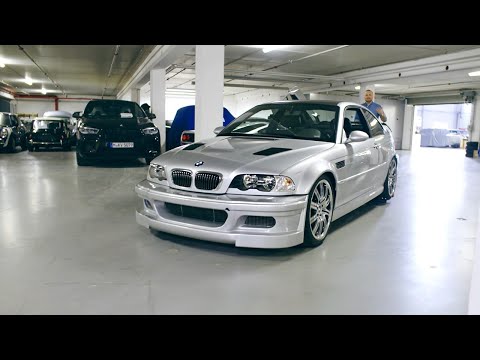