CarPlay in a Tesla remains a dream that’s yet to come true, but while officially this is a feature not currently supported, it doesn’t necessarily mean you can’t make it happen.
5 photos

Well, redditor Stuart McCudden has found the easiest way to do the whole thing, all using a rather simple approach to have wireless CarPlay in his Model 3.

It’s all based on a Kindle Fire 7 tablet placed under the screen in the Model 3 and connected to a Carlinkit wireless CarPlay adapter. The tablet stays in place using nothing more than velcro.

“Using a Kindle Fire 7 to run CarPlay. The micro USB cable plugged in (trying to figure out a way to get that to be less noticeable) is an OTG extension cable that runs to an OTG hub I have in the glove box. Plugged into the OTG is a 2.4ghz remote if I don’t want to touch the screen to control CarPlay, as well as a Carlinkit Wireless CarPlay adapter. That’s powered from a long micro USB cable going to under the armrest. Cable managed so nothing is seen,” the Model 3 owner explains.

Since CarPlay connects wirelessly to the tablet, there’s nothing the driver needs to do when getting behind the wheel. The Kindle Fire detects the iPhone and then launches the app automatically without any input from the user.

As for why anyone would need CarPlay when driving, there are tons of benefits. One of them is the support for apps that aren’t working on the head unit by default. As the redditor says, that includes Waze, which allows drivers to get around the nightmare traffic in our cities by providing us with alternative routes based on user reports.

And last but not least, it’s the HomeKit integration, which makes it possible to control connected devices, such as garage doors, right from the tablet screen. 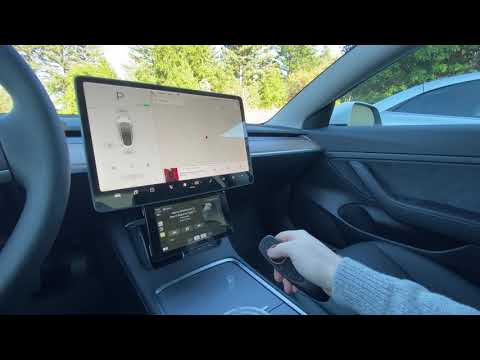