2 Tesla Threatens to Sue The Dawn Project Over FSD Campaign, Hears Back Bring It on

4 Autonomous Driving Ph.D. Shows Why Tesla FSD Is Not Safe

5 Billionaire Is Running for Senate on an Anti-Tesla, Anti-FSD Campaign: Unsafe at Any Speed
Up Next

Mircea Mazuru
The Dawn Project is an organization dedicated to making computers truly safe for humanity. This past year, it has brought awareness to the risks of using Tesla's full self-driving software by carrying out various safety tests. Recently, it presented us yet another test revealing that the car's system will repeatedly hit a child mannequin in a stroller.
6 photos

Before I go into detail, let me tell you more about the Dawn Project. It was founded by Dan O'Dowd, an expert in creating software that never fails and can't be hacked – he's made operating systems for projects such as Lockheed Martin's F-35 Fighter Jets, NASA's Orion Crew Exploration Vehicle, and others. He has the credentials to support his reputation, as he graduated from Caltech in 1976 with a Bachelor of Science in Engineering. He received Caltech's highest honorary for a graduate, the Distinguished Alumni Award.

The Dawn Project recognizes that human life depends on computer-controlled systems, which are exposed to all sorts of risks as they're connected to the internet. Bad actors that possess the proper technical knowledge can severely impact humanity's infrastructure.

But the first danger that the company is tackling is Elon Musk's deployment of dangerous Full Self-Driving (FSD) cars. It's even offering a $15,000 prize to the first person who demonstrates a current, brand new commercial product from a Fortune 500 company that: has a critical safety malfunction on average every 8 minutes, has been on the market for at least six months and is currently in production, and has never been recalled. The $15,000 prize is inspired by Elon Musk raising the price of the self-driving software 10.69.2 to this exact price.

The latest safety test done by The Dawn Project was conducted in a public parking lot in Santa Barbara, California, in October 2022. The company used the latest version of the software available at that time, Tesla Full Self-Driving Beta 10.69.2.2.

A child mannequin in a stroller was placed in the Tesla's path. The driver programmed the Tesla before each run, and the footage clearly shows that the Full Self-Driving is engaged. A flashlight was placed above the accelerator pedal to show that it wasn't pressed during the test.

The car accelerates up to 30 mph (48 kph) and hits the stroller at full force, as the software didn't identify any obstacle. The only error message displayed on the Tesla's screen was: "Supercharging Unavailable: Add a payment method to your Tesla account."

The Dawn Project also recently tested the full self-driving feature in other realistic scenarios. The results indicated that the software would drive around stopped school buses with the stop sign arm extended and their lights flashing. Moreover, they showed that the Tesla did not identify variable school zone limits, so it didn't slow down even when children were present.

Another test had even more horrifying results – it found out that Tesla's FSD repeatedly ran down child-size mannequins of various sizes in its way, especially when they were moving. The Dawn Project demands the ban of FSD software from the roads until the tech giant proves the car can react when it encounters children.

Moreover, The Dawn Project proved that the software would repeatedly ignore "Do Not Enter" and "Road Closed" signs, even though the vehicle had room to recognize and stop for the signs during tests.

All these results are certainly worrying - even though Tesla's FSD feature is undeniably innovative, Tesla's customers who opt for it should be aware it's currently in development and can't be relied solely upon. So far, Tesla threatened to sue The Dawn Project over its nationwide campaign, which included TV advertisements and pages in the New York Times. Dan O'Dowd replied by proposing a public demonstration of Tesla Full Self-Driving’s safety defects, back in September. It will be interesting to see if these new tests will prompt Tesla to take some action, whether to pursue the lawsuit or actually fix the issues. 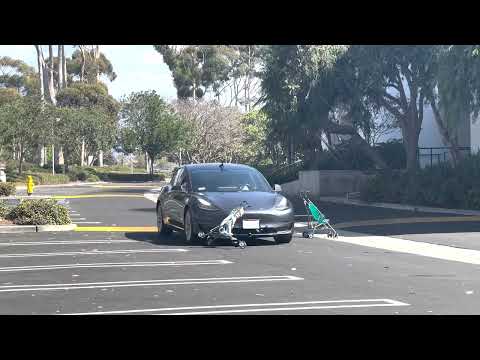