1 A Look Back at the Timeless BMW 3.0 CSL, the Forefather of All M-Badged Bimmers

While the first M3 came with a motorsport-derived, four-cylinder engine, all but one of the subsequent iterations were equipped with straight sixes. BMW M broke with tradition during the development of the V8-powered E90 M3, but that wasn’t the first series production, high-performance 3 Series to feature such an engine.

Although unofficially, this title goes to the E46-based Hartge H50 V8, a fascinating tuner car with an equally fascinating story.

The name Hartge has been synonymous with beefed-up Bimmers ever since the early 1970s. However, it isn’t as renowned as other BMW tuners such as AC Schnitzer, Alpina, or Hamann. Nevertheless, the company established by former race driver and BMW enthusiast Herbert Hartge in 1971 has built some insanely capable rides over the years.

Legend has it that in 2000 Hartge ordered the new E46 M3, but BMW told him that it would take close to a year before he could get his hands on the car. Unwilling to wait that long, he decided to build his own E46 M3.

Using a regular 330ci as the base for this project, Hartge and his team took out its 228-hp straight-six but, instead of modifying it, they decided to swap it with something more powerful, yet authentic. Since using the outdated S50 from the E36 M3 was out of the question due to emissions restrictions and lack of power, Hartge turned his attention to the E39 M5’s brilliant S62, the first production V8 developed by BMW M.

Equipped with high-tech hardware like electronically-actuated individual throttle bodies, hollow camshafts, double VANOS (variable valve timing), and a semi-dry-sump lubrication system, the 4.9-liter was able to produce 394 hp, and best of all, it was relatively easy to fit inside the E46 engine bay. The team only had to modify the steering column and reroute the oil circulation through the left engine mount to make room for the wider unit.

In addition, they reprogrammed the ECU, revised the speed limiter, and modified the exhaust system which, in the end, allowed the S62 to freely rev north of 7,000 rpm. While some of the first cars boasted the same output figures as the E39 M5, some versions were pushed to 444 horses, and a maximum torque figure of 384 lb-ft (520 Nm) that was available from as low as 4,000 rpm. Regardless of the output, the engine was mated to the M5’s Getrag 420G six-speed manual with shorter gear ratios, as well as its limited-slip differential.

The M5’s brake calipers along with the big, vented discs that measured 365 mm (14.3 inches) at the front, and 328 mm (12.9 inches) at the rear were also transplanted into the E46, giving it some much-needed stopping power.

The transformation was completed with a set of cosmetic modifications which included a rear spoiler, smaller side mirrors, a bespoke bulged hood or bumpers, and side skirts that were nearly identical to those of the E46 M3. Inside, the beast got an M5 steering wheel, and Recaro sports seats but it could also be equipped with racing-style buckets borrowed from the Porsche 911 GT3.

Sitting on Hartge Classic 19-inch alloy wheels wrapped in Pirelli P7000 rubber, the H50 V8 was capable of supercar-worthy, straight-line performance figures. It could accelerate to 60 mph (97 kph) in a little over four seconds and reached a top speed that exceeded 186 mph (300 kph).

In 2001, the very first H50 built for Hartge himself was shipped to the United States where it was tested by several automotive magazines. At the time, the S62 under its hood was limited to the standard output, but it was still enough to send Motor Trend journalists into a frenzy. In a later article, they praised its unruly road manners which instantly became addictive, and also pointed out that it felt nearly indestructible. As it turned out, this was exactly what made the car great. Although it was put together by a third-party tuner, it was built to extremely high standards using only BMW M components. As years went by, owners reported no mechanical issues with their rides, despite abusing them on both road and track as often as possible.

Undoubtedly more spectacular than an E46 M3, this outrageous machine was never officially an M car, yet it had an unmolested M engine as well as other M-developed hardware and was meticulously built to the same high-performance standards that made the Motorsport division’s engineers proud.

Sadly, Hartge ceased operations in 2019 due to financial difficulties, but their amazing models will live on to capture the hearts and minds of BMW enthusiasts.

You can see and hear this beast in the original promo video below, but keep in mind that the narrator is German and there are no subtitles. 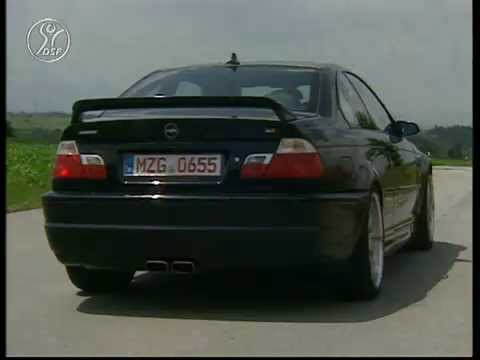