2 Tesla Model D Will Have a Body-on-Frame Structure, May Be a Cibertruck Substitute

3 ICE-T, the V8-Powered Tesla Driven on the Road Creates Confusion and Appreciation

4 After Putting a V8 in a Tesla, Rich Benoit Wants to Give a Corvette Electric Motors

5 The Story of ICE-T, the World’s First Tesla With a Chevy V8 Under the Hood
Car video reviews:
Space Junk

The Collab That You Didn't Know You Wanted Is Here: Sandy Munro Met ICE T

If someone asked you what was the collaboration that you wanted to see but have yet to express it, Sandý Munro's team has arranged something special that fits the bill. We are writing about a meetup with Rich Rebuilds and ICE T. Yes, the only V8-powered Tesla in the world, along with the man who built it, received a visit from Sandy Munro. Ice-T, the rapper, has nothing to do with the vehicle.
6 photos

Sandy is an engineer by training and has worked in the field a long time ago, before entering the consulting field. With that kind of expertise, it is clear that he can spot things that are done incorrectly from a mile away. Few DIY enthusiasts would be confident in showing their project cars to Sandy Munro, but all would be honored to have him look at their build.

Rich Rebuilds managed to complete an impressive swap with his V8-powered Model S. The vehicle has retained as many original components as possible, while the integration of the internal combustion engine was masterfully done. Sandy Munro congratulated him for the work several times throughout the video, which is an achievement in itself.

We still do not know if Elon Musk knows about this swapped Model S or if he cares, but the world has yet to see a reaction out of him about this build. That may be great news, or it may not mean anything. As long as a cease-and-desist is not sent, many people would be satisfied with this aspect.

As Sandy inspects the build, you can notice the quality of work that has gone into ICE T. It is not a straightforward swap, and it has been done in such a clean way that would make many fabricators proud.

For example, the air suspension's tank and compressor are hidden from view, and the trunk has almost all of its capacity available, except for a motorsport-derived fuel cell. The latter is fed through the former charge port, which operates just like on another Tesla. 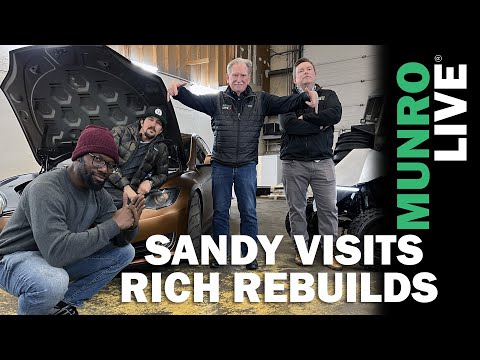