1 The Lobster Lock Is a Biker’s Best Friend, Never Has to Be Taken It Off

2 Munro Motor 2.0, for When You Can’t Decide Between an e-Bike and a Motorcycle

Bicycle sales have skyrocketed in 2020 but whether many of these new owners will still be riding them when the cold season starts is an entirely different matter altogether. They would if they had a Car-eBike from CityQ.

The CityQ Car-eBike, the Indecisive Electric Bike With Car Functionality

At least, that’s what CityQ is hoping. Figures cited by the company show that an estimated seventy percent of cyclists hang up their wheels when the frost and heavy rains start, which means they’re left stranded for transport. A car could be a solution, but so would a fully enclosed, cargo bike: an electric bike with the functionality (but not the size or the associated costs) of a car.

Enter the Car-eBike, whose name really says it all. Meant to be a frontrunner of an expected wave of weather-protected bicycles, for which demand is apparently on the rise, it’s a four-wheel bike that resembles a car, in that it offers protection from the elements and some space in the back. It comes with a window and a roof, and semi-rotating doors that can be either semi- or fully-enclosed.

This way, this indecisive e-bike slash car aims to offer the best of both worlds: the clear conscience and minuscule expense of owning and riding a bike, with part of the functionality of a car. Like similar offers, this one too could be best described as cute.

“Imagine cycling whenever you want despite the weather, traffic or luggage limitations,” CityQ says. “Imagine transporting your dear ones safely, your children, your bags and don't forget the doggy. Not having to use the car or public transport going to the shop or gym, also being able to get to work, around the city or to the beach. All of that without having to worry about parking, driving license or rainy days.”

This sounds almost too enticing. So what does CityQ bring to the table?

You have to pedal this Car-eBike in order to move around, which means it’s still technically a bicycle. However, it doesn’t have a chain or mechanical gears: much like electric cars, it uses a software-managed drivetrain, which allows programming a number of riding modes, and it comes with cruise control, reverse, heavy cargo, automatic gearing or regenerating brakes, depending on the current needs.

Unlike other e-bikes, it doesn’t have a throttle-only mode. It seems to have been made redundant by the wide range of riding modes.

Powered by a 250W motor to comply with EU regulations, it has a top speed of 25 kph (15.5 mph) and a range of 70 to 100 km (43 to 62 miles) using a dual battery pack. CityQ says it’s compliant with European regulations for e-bikes and 3-4 wheel cargo e-bikes, which means you can ride it on dedicated bicycle paths and trails, where these are available. However, in a city with a less developed bike infrastructure, it would mean riding it on the street, in regular traffic.

The Car-eBike weighs 70 kg (154 pounds), so good luck trying to get it up the stairs to your apartment if you don’t have a garage to keep it in. On the bright side, it comes with Bluetooth connectivity and pairs with a dedicated app, so you can trace it and lock / unlock it, so you could leave it outside. In theory, at the very least.

“CityQ is an ebike with the comfort and technology of a car and with the benefits of a bicycle. You can cycle two children and luggage door to door without having to worry about bad weather, car traffic or parking issues,” founder Morten Rynning says in a press release.

The CityQ is now available for pre-order: a €99 ($111) deposit will reserve one for you, but there’s no mention of a delivery date or MRSP. Reports online say you could be looking at a €6,000 ($6,727) bill at the end, which brings it on equal footing with a very high-end e-bike – or a low-cost actual car.

Still, interest in it ranks pretty high: according to the company, more than 500 people have already reserved their own Car-eBike and the company is in talks for fleets for cargo transport in Scandinavia and the UK. 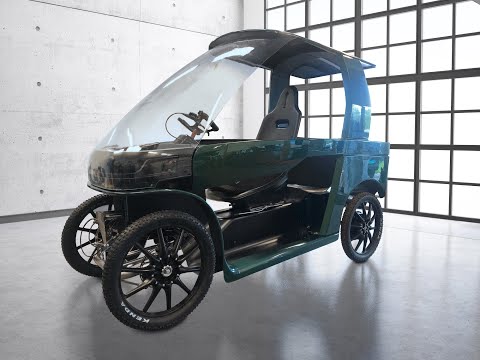