Alina Dumitrache
The quest of finding affordable means of transportation for both Britain and France began ever since the 1700s, with airlines, freights and automobiles dominating the market before 1994. However, while airlines were considered too expensive, ferries and automobiles required too much time. But back in 1984, the problem began being solved. Considered to be one of the world’s seven modern marvels, the Channel Tunnel runs underneath the English Tunnel, linking Great Britain and France. Brief History
The idea of a road tunnel was suggested to Napoleon himself back in 1802. The project presented to Napoleon implied two superimposed sections. The upper tunnel was to be a paved road for horse-drawn vehicles and was to be lit by oil lamps. The lower tunnel was to be used for draining any water that might have seeped into the upper one. 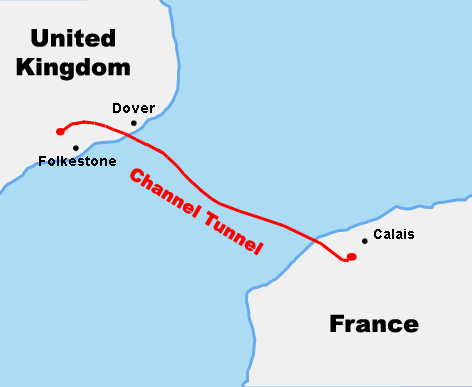 Unfortunately, there are no traces today of those plans. Napoleon himself said about the tunnel "That is one of the great things we shall be able to accomplish together," when speaking with Charles James Fox. Some say the idea might have appealed to Napoleon as a possible means of invading England. There has been a great deal of preliminary work on both sides of the Channel, but the idea was dropped. 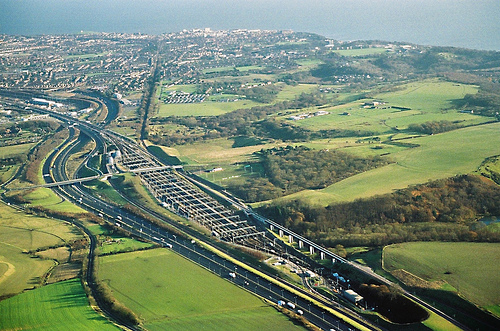 The Chunnel actually consists of three tunnels, each 50 kilometers long and 30 meters apart from one another. Two of the tubes are full sized and accommodate rail traffic, while the third is a smaller service tunnel that serves as an emergency escape route. There are also several "cross-over" passages that allow trains to switch from one track to another and are also used for ventilation and maintenance service access. According to engineering.com, every 200 meters, the two rail tunnels are linked by piston relief ducts that are used for the regulation of the air pressure in the tunnels.

The UK terminal include overbridges, access ramps and the platforms where vehicles load into and unload from the shuttle trains. Buildings include a control tower, frontier control buildings for French and British authorities, passenger and freight amenity buildings, security and operations staff headquarters.

On the other hand, the French terminal includes the Eurotunnel head office, an additional control tower, passenger terminal buildings and frontier controls, while a separate area contains all the freight facilities. 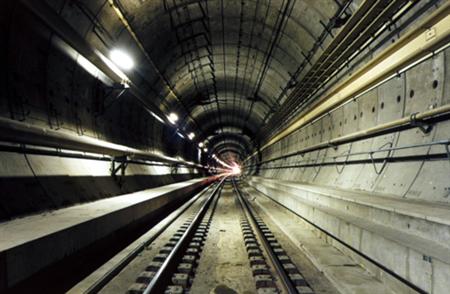 The Channel Tunnel and its railway system is owned and operated by Eurotunnel. Trains enter the tunnels at terminals located at Folkestone (England) and at Calais (France). Road vehicles access the terminals from the M20 motorway in Kent or via the autoroutes A16 and A26 in the Nord-Pas-de-Calais. It is estimated that trains travel through the tunnel at speeds of up to 100 miles per hour and it is possible to get from one end to the other in only 20 minutes, while journey time platform to platform is of about 35 minutes.

The system has been carefully thought out and everything is planned through the smallest detail. Cars, coaches and lorries are directed into appropriate lanes before arrival at the tollbooths, where tickets are purchased. Lorries follow a separate route to areas where travel facilities and customs clearance for freight are located, before following signs to the loading platforms.

Drivers of passenger vehicles may proceed directly towards the allocation zones where signs indicate a designated loading platform. Vehicles then travel onto the overbridges and down the ramp to the platform and into the shuttle train. 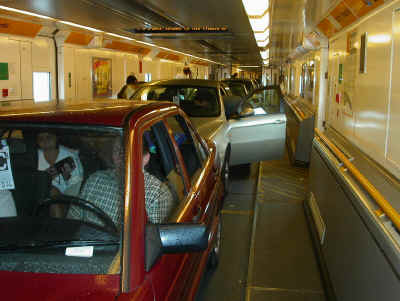 The shuttle trains that operates through the Chunnel have a larger loading gauge than either British or French railways. They cannot travel outside the tunnel and go round the loop at each terminal. This is meant to even the wear on the wheels of the shuttle engines and vehicles.
Eurotunnel operates a fleet of 25 shuttle trains to transport cars, coaches and trucks and their drivers and passengers. Half of the trains transports cars and other low vehicles in double-deck wagons, while coaches buses and other high vehicles travel in the single-deck rake at the front of the train.

Passenger vehicle carriages are sealed off with fire-proof doors and are pressurised, but include smaller pedestrian doors which may be opened when the train is in motion to move from one carriage to the next. They close back automatically. 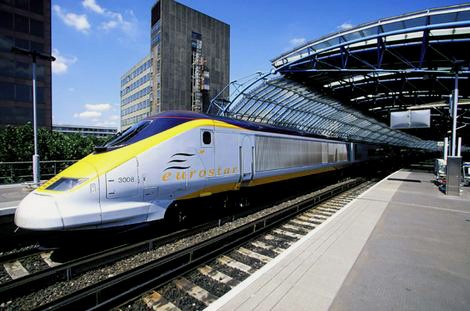 Designated Class 373 in the UK and TGV373000 in France, the high-speed passenger train that runs through the Chunnel operates on two routes: Brussels Midi to London St Pancras International and Paris Nord to St Pancras International. However, some Eurostar services stop at Ashford International in Kent, Calais Frethun or Lille-Europe from where one can connect to the TGV network to travel onwards throughout France.

All Eurostar passengers must submit to border and luggage controls, as the UK is not part of the Schengen Agreement. In Leisure Select, a meal and drinks service is included in the price of the ticket. Travelers also benefit from wide, reclining seats and a choice of newspapers and magazines. In Standard Class, travelers can choose from one of the train’s two bar-buffets.

The trains can operate at up to 300 km/h(186 mph) on high-speed lines, and 160 km/h (99 mph) in the Channel Tunnel. It is, however, possible to exceed the 300km/h speed limit, but only with special permission from the safety authorities in the respective country. Speed limits in the Channel Tunnel are dictated by air-resistance, energy (heat) dissipation and the need to fit in with other, slower trains.