1 Japan Blows Urban Mobility Away With Canguro, the Most Advanced Partner Android

5 The Wheelchair Gets a Futuristic Makeover With This Realizable Concept
Car video reviews:
Space Junk

Robotics and the use of exoskeletons have been making revolutionary advances in recent years. But this tech seems to be accessible only to a select few. Well, that is no longer the case.

What you see here isn’t exactly a robot, but rather a very accessible exoskeleton for the masses. Now, don’t let your imagination wander too far; this particular device is only meant to offer assisted sitting. That right folks, this is known as the Chairless Chair produced by a European company  called Noone. If this doesn't make any sense to you, it will shortly if you carry on reading.

The device is meant to offer sitting support for workers in standing workplaces and is the first mass-produced version of its kind. Basically, it’s a wearable ergonomic sitting support. Not a complete exoskeleton, I know, but it still brings the benefits of one. After all, who says an exoskeleton’s only purpose is to propel?

Imagine a factory floor where workers are required to stand for long periods of time without being able to use traditional sitting methods as those would be considered obstacles in the workplace. How do you keep employees rested and productive without impairing their ability to move freely around the work area? You just get one of these.

The entire system is set up like this. The legs themselves are actually composed of a number of components joined together. Similar to human legs, this chair has several main components: foot, shin, femur, knee, and a support for your Maximus.

The bottom of the chair includes the feet, which look rather like a pair of industrial-duty tripod feet. They are then attached to the wearer’s own ankles, keeping the chair tightly fastened to the body.

These feet are then attached to what can be considered the shins of the exoskeleton. One neat thing about the way it’s all set up is these shins are able to be adjusted to several wearer body sizes. To engage the adjustment, it’s only necessary to push a button on the back of each leg.

Up next is the femoral segment. Here we find the segment that connects the lower part of the chair to the sitting pad. It’s also where the legs can be activated for sitting or disengaged for mobility again. This too happens at the touch of a button, or rather a lever this time. Behind the knees are two minor components, the orange segments, which function as stoppers that keep the entire device from collapsing when you do finally decide you need a break from work.

Finally, we have the final and all important seat. Calling it a seat is a bit off, as it rather resembles two pads, just big enough for each buttock. It’s minimalism and ergonomics at its finest. The two remaining fastening belts are found here: one set is attached to the femoral area, with another around the waist. The three-point harness style allows the chair to always be ready for a sit, but also gives the wearer the freedom to move without obstruction. If needed, an upper-body harness can also be used for more security.

How successful this design is, well, that’s a different story. We can let Ford, Daimler, Toyota, Volkswagen, and Audi tell it like it is as they seem to be pretty happy customers. 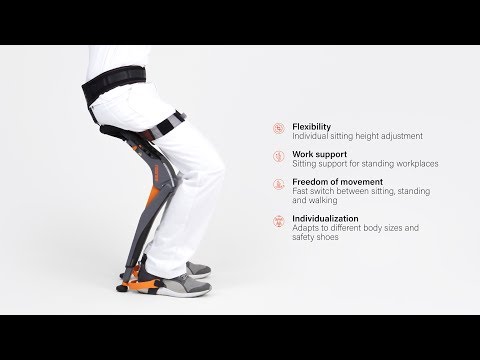 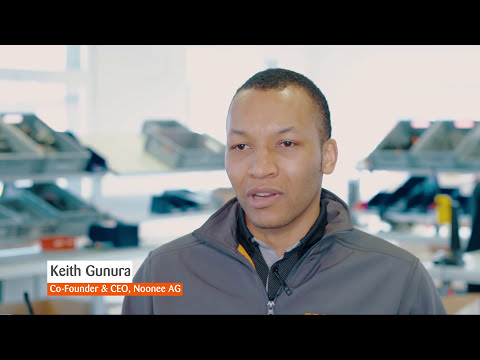