1 Thunderbird 2 Is How You Turn a ‘94 Toyota Previa in a One-Off, Awesome Campervan

3 Remembering the ‘72 Toyota RV-2, the Hip Wagon Camper That Was Ahead of Its Time

4 Meet the ioCamper, the Towable Tiny Box That Expands Into a Comfy Home for 6 at Camp

5 The Cramper Van Is How You Turn a Bicycle Into a Fully Working Camper
Car video reviews:
Coverstory

Modern man (and woman) will often look back several decades before their time and wonder at how simple and naive the older generations were back then, and yet how adorably pleasant life seemed to be. All that, and so much more, is best summed up in a creation like the MINI Caraboot.

The Caraboot Is a Maximum MINI, With Four-Person Accommodation and a Boat

November is Tuning Month on autoevolution, a very special month when we’re covering (and celebrating) a large variety of modifications to all sorts of vehicles. The MINI Caraboot, a true unicorn on the campervan market, fits the bill, while also delivering heaps of nostalgia and adorableness, though not much in terms of performance.

The Caraboot was a MINI Van that somehow packed a caravan and a boat in the same holiday package, for which reason it was dubbed the perfect vehicle for the great outdoors, both for extended or shorter stays. At the time it was introduced to the general public, in 1964, it was the epitome of luxury (or so marketing materials claimed) and offered sleeping for four people, together with dining and cooking facilities. It also integrated a rowing boat into the body of the caravan, so really, what more could you ask for?

Like the MINI Wildgoose we covered earlier this month, the Caraboot was a MINI conversion from a local British coachbuilder. Starting from the same base vehicle as the Wildgoose, the MINI Van, Euxton Coachcraft Ltd. from Euxton in Lancashire, created a sliding caravan with a boat on top. The body of the clamshell camper was made of glass-reinforced plastic (GPR) and slid rearward on grooves insets attached to the van, when you turned the crank handle. Expanded, the Caraboot was 18 feet long (5.49 meters) and aimed to rival actual campervans.

The Caraboot rolled on six wheels, and its highest selling point, as the video below will show, was that you could detach the van from the camper. The idea would be that you could still use the MINI for stuff, while the camper stayed at camp, but in reality, you were left with an open camper that invited in all manifestations of the infamously fickle British weather.

Inside the camper, you got a two-burner stove and some cooking space, as well as a sink. The sofa could seat two at the fold-down dinner table, but also sleep two when expanded. Two more adults could sleep in the area above the MINI, which could double as storage. Despite the cramped interior, the dining table sat four, as long as they didn’t mind poking each other in the eye every so often.

As the very sexist ad below, retrieved by British Pathe, shows, these four adults could spend the day separately and congregate only over tea and chocolate biscuits. Because no man feels comfortable near a kitchen, the gentlemen could take the rowing boat off the roof of the MINI and head fishing – like these two do in the video, looking mighty dandy in their dress shoes, carefully pressed pants, white shirt and ties. Indeed, the Caraboot integrated a rowing boat and oars, and it could be used in fine weather, when the secondary bedroom slash storage room did not require protection from the elements.

Power from the Caraboat came from the MINI Van’s stock four-cylinder, 850cc (52ci) engine, which was rated at 34 hp (25 kW) and had a claimed top speed of 70 mph (112 kph). According to one account on the MaximumMini blog, from an Australian doctor who took the Caraboot on a trip around the UK in 1969, it was terribly slow at all times and had considerable issues uphill. But despite appearances, it was a comfortable camper for two and an overall neat vehicle that always attracted attention and was “low on petrol.”

No one knows for sure how many Caraboots were made by Euxton, but all signs point to at least two: the one in the video (that’s the designer and builder, and his business partner appearing in it, together with the wives), and the one the doctor rented out. Similarly, no one knows how many have survived; one emerged for sale in 2011-2012, having lost the integrated rowing boat and in very poor condition, and quietly slipped off the map right away.

So this makes the Caraboot one of the rarest campervans in the world. It hails to a simpler, albeit more sexist time, when anything was possible as long as you had a plastic roof over your head, a rowing boat and the desire to hit the road. And hot tea. You can’t have a proper adventure without tea. 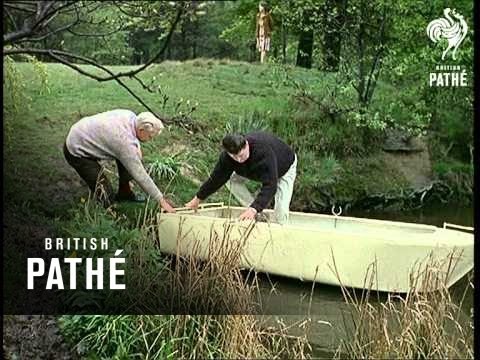