2 Transformable Tiny House Is a $44,000 Magical Home Built From Scratch

3 XPro One Is a Rugged RV That Sleeps Three, Provides 10 Days of Off-Grid Living

4 Tadpole Tiny House Is the World’s First Tiny to Double as a Car Carrier, Quite Elegant

5 GlamBOX: In This Rustic Tiny House, the Master Bed Is the Only One With Wheels
Up Next

Elena Gorgan
Most tiny house builders will try to explain, if not justify, the high prices on their builds by the fact that they offer all the comfort and all the amenities of a regularly-sized home, but on wheels. The Cahute is different, in that it drops all pretense.
18 photos

Downsizing and the tiny house movement it has inspired are not fueled by environmental concerns only. They’re also motivated by the desire for more freedom of movement and especially by the need to cut down costs. Factor in the promise of the comparable levels of comfort to an actual house, and you get a tiny that is anything but.

The Cahute takes a different approach to downsizing, in that its main focus is sustainability. Designed and built by Thomas and a small team in Brittany, France, it was created specifically to travel the roads in Europe and have the smallest environmental impact possible. As such, it is ultra-compact, very lightweight, and produced only of sustainable materials, such as locally-sourced poplar wood. It is also perfectly capable for off-grid living, as long as you don’t expect the same degree of comfort you’d get in a normal, non-moving house.

Cahute actually offers three main types of tinies, each with various models and add-ons, including off-grid features. There’s the Classic, the Tailor Made (a personalized spin on the Classic), and the Original, which is exactly what its name says, a fully-customized tiny. The Classic was also featured a while back on an episode of Living Big in a Tiny House, and it remains the company’s most popular model.

At 10 square meters (107.6 square feet) of total living space, divided between the ground floor and the loft, it’s the very definition of a tiny house. It’s probably ideal for one person, given the limited resources (space, storage, and water), but two people with the same goals and motivation could still live inside it.

Designed in accordance to traditional architecture in Brittany, the Cahute features a sloped aluminum roof and very small windows, to offer protection from the elements. The outside layer is made of poplar treated with the ancient Japanese technique of wood charring, which makes it impervious to adverse weather, with a layer of cork for insulation, and the interior layer also of poplar. Everything from the paint to the glue used is natural.

The house sits on a single-axle trailer and, with a total weight of 1,300 kg (2,866 pounds), it can be easily towed even by a small passenger vehicle. That was Thomas’ goal from the start, he explains: the big trucks so popular in the U.S. are a rare sight in Europe, so he needed to scale down the tiny houses here until he created one that could be towed with the family car. The obvious challenge was fitting all the basics inside such a tiny footprint, and he did it the hard way, through trial and error.

The layout is very simple (for the Classic model): there’s a kitchen to the right as you enter the home, with a small sink and foot-actuated water pump, and a cooker. To do away with plumbing, Thomas chose a more basic setup, with canisters that hold the water and the aforementioned pump. As he puts it, if you make something more difficult, man is tempted to do without it or with less of it; having to pump your own water and to do with a limited supply is meant to discourage waste or, at the very least, to make you more aware of how much you consume.

On the right side is the storage area: fabric shelves and, up over the entryway, addition space to store containers with more stuff. Thomas included a small bookshelf, which hides the removable ladder that you need to get to the bedroom loft.

At the opposite end of the tiny is the sofa, which extends into a two-person bed and has a bit more storage space underneath. There’s a fold-down table with integrated storage, and right next to the bookshelf, a small office space with a gas heater underneath, for when you’re typing away at the laptop and are getting cold feet. Of the literal kind.

The bathroom is barely that: Thomas chose to make it as small as possible to get more space for the living. It includes a composting toilet and a copper shower, but the shower itself is another canister (20 liters / 5.2 gallons) with a shower head, that you have to fill with water you warm up in the kitchen. It’s like a camping setup, but placed inside a mobile house. Again, if you’re not particularly fussy about the shower routine and are mindful of reducing your footprint, it can work.

A Cahute tiny can work on its own, as a temporary or permanent residence, and the one in the video below is meant for off-grid living, thanks to a mobile solar panel, battery pack and inverter. But the Cahute can also work as part of a larger structure, where you link more such units together. As tiny as these tinies are, they also aim to be very versatile. 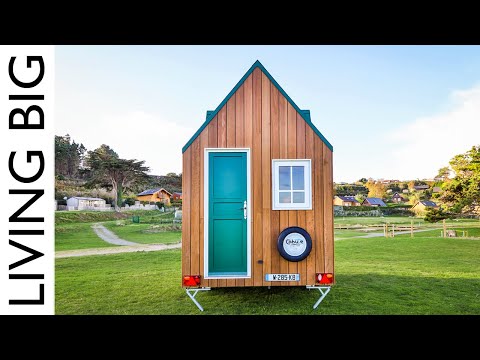