Home > News > Videogames
24 Nov 2021, 19:15 UTC ·
by Cosmin Vasile
Assetto Corsa Competizione has been pretty good for fans of the series, but the team at Kunos is making it even better. The highly anticipated BMW M4 GT3 is an important part of the latest update, but not the only one.
6 photos

Players can expect new 2021 season liveries for the GT World Challenger and a wide range of performance enhancements, balance adjustments, and improvements to the championship mode, which now includes the Open vehicle category to make it smoother for more classes to fit in. More importantly, the Open class fully supports multiplayer and plays like a “sandbox” season.

Along with the new liveries, the latest update also adds the Fanatec GT World Challenge Europe 2021 season as bonus content with all entries and drivers, as well as a championship season. Additionally, he new BMW M4 GT3 is offered for free as bonus content as part of the 2021 season.

As far as the performance enhancements go, the folks at Kunos have been working on the physics engine in order to simulate vehicles included in the game as closer to real-life as possible. So, update 1.8 brings the next major evolution in the game’s physics model with important improvements across every aspect of the tire simulation and other new features.

PC players should also expect consistent physics engine optimizations, which should result in smoother single-player performance with a high number of AI and fewer spikes due to overloading single cores on heavy calculations.

Furthermore, those using the Thrustmaster SF1000 will be happy to know that the latest update makes it fully compatible with Assetto Corsa Competizione.

These are just some of the most important improvements included in update v1.8, but the list is much longer. Although many of the changes are aimed at PC players, all the new content, including the Open class and the BMW M4 GT3, is available on console too. 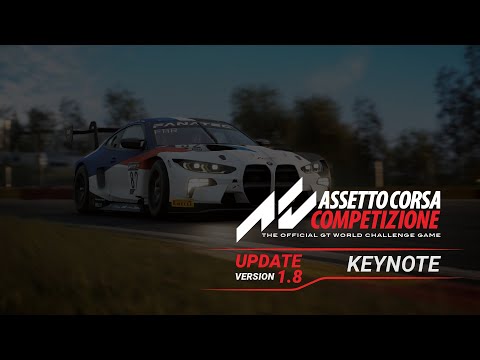