3 The Drivable Living Room, AKA the MINI Urbanaut, Could Actually Go Into Production

5 Live Pics: BMW i Circular Concept Car Bows in Munich With i3 Look Taken Further
Car video reviews:
Up Next

Live Pics: 2022 BMW i4 Shows Its Electric Soul in Munich, Looks Like a Concept

The BMW i Vision Circular Is Gorgeous in Motion, Hopes to Be the Supercar of Tomorrow

Regardless of how you imagine the future, as regards the automobile, BMW has a very clear idea of the direction it should head into. It will be sustainable, still luxurious, highly personalizable, and no slouch either. Just look at the i Vision Circular concept as an example.
107 photos

The BMW i Vision Circular concept was introduced ahead of the IAA 2021, which is taking place in Munich, Germany, between September 7 and 12. The physical concept was brought to the event, allowing visitors a glimpse at the car of 2040, as imagined by the BMW i Design division.

It’s very striking alright, and it’s even more so in motion. They say pictures are worth a thousand words, but you really can’t beat moving pictures.

Supercar Blondie is at IAA 2021 and she got some alone time with the Circular concept. You can see the resulting video at the bottom of the page; aside from offering a more comprehensive look at this unique design exercise, it also brings a few more details of the new design philosophy.

Supercar Blondie sums it up as the four Rs, which BMW identifies as Rethink, Reduce, Reuse, and Recycle. To build a Circular car, BMW would use only 12 materials, all of which would be completely recyclable at the end of a life cycle. This reduction in the number of materials was achieved through rethinking the entire approach to car building and assembly. Even the BMW logo was “sacrificed” in the process and is now replaced with an etching directly into the steel of the body of the car. The same goes for the kidney grille, which is now made of LED lights that run across the entire front end.

The Circular concept is made of steel, which has been polished to a silvery gold shade. The idea is to avoid using paint that’s so harmful to the environment, so BMW tapered the steel towards the rear to get a violet shade, for a pop of color. This is something that Elon Musk also plans to do with the Tesla Cybertruck. BMW adds further customization options through LED lights, which run throughout the exterior of the vehicle, including on the doors.

The interior is plush and cozy, in soft pink and warm gray, with fabrics made from recycled plastic and a steering wheel of sustainable wood. You get more customizable lighting here, and a center console that will probably get you feeling like you suddenly got your very own magic crystal. It won’t tell your future, though, unless it’s in terms of weather forecast and trip estimates. There are no screens inside the Circular, because the windshield serves as one.

Certain details, like the 3D-printed door hinges, are incredibly beautiful to look at, almost like tiny works of art of their own. But what will probably impress today’s drivers is BMW’s promise that, despite all this coziness, the Circular would still be a powerful, impressive car. A supercar, in fact, but from the future.

The Circular concept might never end up in production, so for the time being, it serves only as testament for BMW’s commitment to a more sustainable future. And it makes for an interesting sight in motion. 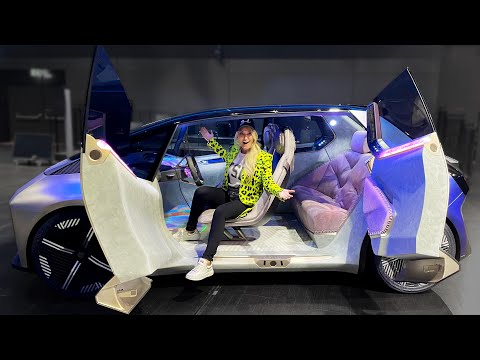