4 The Nordic Beowulf, a Dual-Body Amphibious Machine Ready to Conquer Any Terrain

NASA Wants to Know Why Venus Is so Inhospitable, Sends Two Missions Worth $500M

"Biski" Amphibious Vehicle Promised an Otherworldly Ride, Is Yet to Deliver

Cristian Curmei
Now that summer is here, everyone is looking to get out of the house and out onto the open road—or waters. If only you owned a Biski and would be able to do both with just one vehicle.
11 photos

The above statement is as straightforward as possible; what you have here is a vehicle that can be both a motorcycle (bike) and a jet ski. Put the two together into one neatly wrapped package, and you get the Biski. Simple enough, I guess.

Before talking about the crazy and mind-blowingly awesome trinket you see here, why not look at who's behind something like this amphibious and morphing ride. Well, that would be a team called Gibbs Sports Amphibians.

You may have heard of them before. They hit the U.S. market back in 2013-2016 with the Quadski, an amphibious quad and jet ski vehicle. They seemed to be amazing, except for one little problem. Due to an issue with steering, causing the operator to lose control during operation, 320 units went on recall. Later, this crew revealed a few conceptual vehicles, one of which is the Biski.

If you somehow fall in love with this vehicle, I must be the bearer of bad news and inform you that the manufacturer’s website indicates this vehicle is nothing more than a concept. At this time, all sources point out that the Biski will not be sold. Speculations revolved around a $42,000 price range if it ever hit the market, as the Quadski was in a similar ballpark, but all that remained just speculation.

However, this Biski looked ready, as far as development goes. I mean, some serious cash had been poured to bring it to life, as some lucky folks had tested it out extensively. Just check out the video below to see it in action; even a full-blown spec sheet is available.

For example, as a motorcycle, the Biski can reach speeds of 80 mph (129 kph) on land, well within the viable range of what you’d normally find around town or cruising a highway. It even functions the same way (RWD), although tilting in a turn would be more like riding a moped. Sure, the wide rear has been angled to not interfere with turning, but it still looks to be affected.

As for the jet ski mode, simply ride the motorcycle into water, wait for less than five seconds (time allotted to the transition), and then just throttle your way across local waterways. Even in jet ski mode, this vehicle is said to reach speeds upwards of 37 mph (59.5 kph or 32.15 knots). Sure, it may be less than the modern-day average for a jet ski, but there’s got to be a tradeoff anytime your vehicle can perform some neat tricks like these.

The Biski isn’t very light either; a whole 767 lbs (348 kg) is what its basic 2-cylinder engine lugs around. Overall, a max 55 horsepower could be cranked out from the engine. For marine propulsion, it uses Gibbs custom Dual-jet technology, although there’s no mention anywhere how this engine may have been set up or designed. One thing that may offer a hint is that the Quadski utilizes a BMW Motorrad K1300 engine, but again, for the Biski, this is not mentioned.

With coil-over spring dampers for suspension, front and rear hydraulic disc brakes, and fully equipped with marine and road navigational lighting, this amphibious vehicle sounded promising, so what happened? Well, your guess is as good as anyone else’s.

So far, no news, no events, no nothing including a Biski, because if there was, I (and probably the rest of the world) wouldn’t hesitate to try and do at least a test ride on one of these. I would probably have a hard time wearing armor and a life vest at the same time, though. 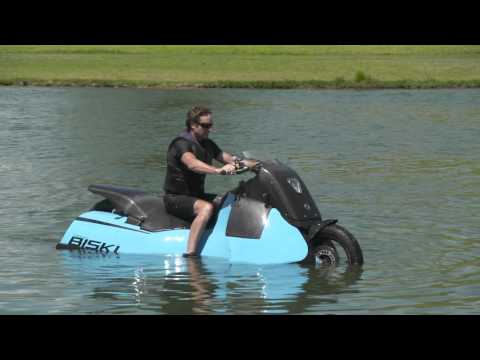