1 The ENGWE X26 e-Bike Is Big, Bold and Beastly, With Triple Suspension and 1000W Motor

5 Bali Cruiser Go! Is a Tassel-Filled and Vintage-Inspired EV for the Modern Child-O-Adult
Car video reviews:
Up Next

Not All Convertibles Are Destined for Greatness, This 1985 Cavalier Is Classic Proof

The Best Way to Beat Rising Gas Prices, Public Transport Strikes Is by Kayaking to Work

These days, you might be doing a lot of budget re-adjusting, what with rising gas prices, the spiking cost of living and, in the UK at least, public transport strikes. Some of these could be solved by finding a different way to commute, and one man is proposing kayaking as an alternative.
6 photos

For many city-dwellers, the work commute is a reality – one that’s proving either very costly or very unpredictable these days. George Bullard is the man with an unlikely solution: kayaking to work. Bullard has been using a kayak for his work commute since 2015, and it’s the cheapest and most fun way he could ever think of to get to his office in Presteigne in Wales.

“It's definitely cheaper than a car, especially with the price of fuel going up at the moment,” he tells the BBC. “I can't think how many journeys I've made on a kayak that cost me £74.” That’s almost $91 at the current exchange rate, but Bullard says he’s now using a slightly more expensive kayak after upgrading: £80 ($98).

His story is now splashed across British media, with headlines that suggest he’s found a way to beat the system, whether you take that to mean rising gas prices or the ongoing rail strikes that have paralyzed a big portion of the country. There is one catch though, and it’s huge.

George Bullard, as you might have guessed, is no ordinary office worker. He is an experienced, record-breaking kayaker, athlete and adventurer, famous for his endurance feats and, why yes, the fact that he kayaks to work. He’s done a similar stunt in 2017 (see the video below), when he said he would kayak on the Thames to get to his London office instead of riding the tube, as most people did.

The catch is not a lie on Bullard’s part, though. Through these interviews, and his work in general, he tries to spread the word that staying active on the commute does wonders to your health, both physical and mental. Public transport is good, but doing something physical on your own is even better. Cheaper, too.

“[I] encourage everyone to find different means of commuting to work and ditch the public transport and cars,” he says. “Whether it be walking, cycling, roller-skating or scootering, it is so good for your mental, physical, emotional and spiritual wellbeing.”

Bullard says he doesn’t encourage inexperienced people to start kayaking to work or even experienced ones from getting into the water when the conditions (tide, weather) are not right. 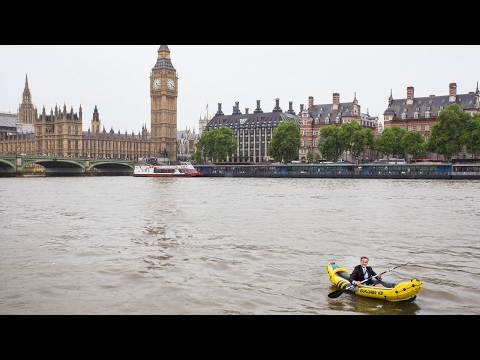