Home > News > Videogames
10 Aug 2022, 04:07 UTC ·
by Cosmin Vasile
I think we can all agree that Train Sim World is the best train simulator game out there. Even those who don’t agree with this statement must admit that both games have a huge amount of content. After literally hundreds of DLCs released throughout the years, Train Sim World 2 is getting a sequel this year, which we expect to be bigger and better than any of its predecessors.
9 photos

Announced this week by developer Dovetail Games, Train Sim World 3 will be launched on PC (via Steam and Epic Games Store), PlayStation 4, PlayStation 5, Xbox One, and Xbox Series X/S on September 6, so in less than a month from now.

As one would expect, Train Sim World 3 comes with many improvements over the previous title, including a brand-new dynamic weather system that promises stunning volumetric skies, as well as a new lighting system that’s supposed to enhance both realism and immersion.

Furthermore, all trains in the game can be driven through extreme weather such as snow and thunderstorms, each altering the driving experience and requiring players to pay attention to track conditions.

The new Training Center included in Train Sim World 3 acts like a hub where players can learn how to drive the locomotives featured in the game on a brand-new route. Three routes have been revealed as part of Train Sim World 3 at launch: California’s Cajon Pass, Germany’s ICE 3 and ICE 1, and an extended and enhanced version of Britain’s Southeastern Highspeed route.

More importantly, Dovetail Games announced that owners of Train Sim World 2 and its add-ons will be able to continue to enjoy the wealth of routes and locomotives. However, while both will be compatible with Train Sim World 3, they will not include the new features.

Several introductory packages will be available for purchase, from the “Starter Packs” containing the brand-new Training Center and 1 route expansion to the Deluxe Edition, which includes an upgraded version of the “Spirit of Steam” add-on (released earlier this year for Train Sim World 2). 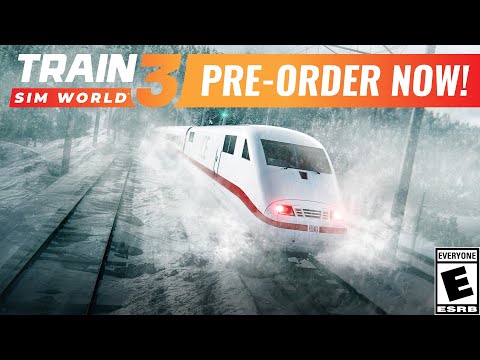