1 The Ursa Tiny Home Is Completely Self-Sufficient, Quite a Stunner

3 Wander 2.0 Prefab Cabin Is All About Bonding With Nature, Sustainability

The tiny house movement is all about downsizing and living in accordance and harmony with nature, as much as it’s possible at this point. That said, we can all agree that not all tiny houses are created equal, and only those that display great creativity stand out on an already crowded market.

Though still far from widely affordable, tiny houses have seen an unprecedented surge in popularity over the past couple of years. Partly due to the ongoing health crisis and rising environmental concerns, as well as a desire for more freedom of movement against the background of work-at-home policies, tiny houses have become more of a common sight.

One could argue that there’s not much difference between builds of this type, but that would be doing a disservice to tiny house designers. Their challenge is no small thing, that of fitting an entire lifestyle in a very small footprint and, at the same time, of delivering comfort and style in equal measure. Autumn, the latest custom project from New Zealand-based Build Tiny, is living proof of how this challenge can be solved – and, in the process, of how you can do away with spatial limitations through smart design.

Autumn was officially introduced in September this year after it was completed and delivered as a turnkey project to the owner the previous month. It is an entirely in-house project with Build Tiny, a company that has already established a reputation in the tiny home market as one of the most creative out there. It is also a stunner, with clear Japanese inspiration and a design that tries to create the impression of spaciousness in what can only be described as a very cramped space.

Designed for two occupants, Autumn is a mere 6 meters (19.6 feet) long. It’s not the shortest tiny out there, but it’s way under the average length, and this helps with movability and maintenance costs. All Build Tiny builds are 2.4 meters (7.8 feet) wide; Autumn is also 4.2 meters (13.7 feet) tall.

Like other custom and series builds from Build Tiny, Autumn sits on a double-axle trailer from partner Bay Engineering Solutions (BES). Build Tiny uses detachable trailers because they present a range of benefits over standard. The most important being that, once you get to where you want to be, you can simply lift the steel frame of the tiny off the trailer using four jacks, place it on four stabilizers, and then remove the trailer to use for something else.

The tiny itself comes with a steel frame and vinyl cladding in Annapolis Blue, combined with Vulcan Charred Cladding, a textured surface inspired by yakisugi, also known as shou sugi ban, the Japanese technique of heat-treating wood. The interior is lightweight poplar core plywood, with double glazed windows – plenty of them, to create the illusion of airiness. The Japanese inspiration carries within, via a striking wallpaper provided by the owner, which was integrated into the design to create the lounge area.

For those thinking that all interiors of tiny houses look pretty much the same, the phrase “the devil is in the details” comes to mind – though with none of the negative connotations. Autumn puts the “tiny” in “tiny home,” but it still comes across as a very comfortable and inviting space, and the very opposite of cramped.

The entrance's left is a U-shaped kitchen with all the necessary fixtures and appliances, which spills into the living slash dining area. The bathroom is to the right, under the queen-size loft. It has a corner shower, vanity and sink, and an incinerating toilet, and a surprising amount of storage. The owner asked for a separate entrance for the pet and sleeping quarters for it – and they got it.

The upstairs is comprised of the bedroom area, which includes a standing platform for changing outfits while standing and extra lounge space in the form of netting. Using nets to create more space in the upstairs section of a tiny house is not unprecedented, but the way Autumn does it still stands out: placing a large skylight over the netted lounge allows for stargazing.

Autumn creates space where there is none to be had by means of smart design, as noted above. Appliances in the kitchen are situated below eye level, for instance, and expansive glazing allows the eye to wander outside whichever way you turn. The modularity of the furniture is another means in which designers create comfort: the nightstand table becomes a desk for working at home, walls hide secret storage, and cabinets appliances.

“Just because a space is mainly about utility, doesn’t mean it can’t also be creative,” Build Tiny says in the description of this project. And that’s definitely true about Autumn, which stands as proof that a tiny footprint can still provide comfortable and elegant accommodation for two grown adults, with every creature comfort you’d find in a regular, non-movable home. 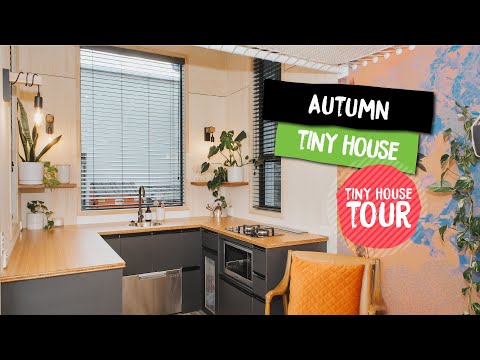 2019 Hot Wheels Super Treasure Hunt Part 1: A Look at the First Five Cars of the YearSee all coverstories