3 MY Roswell Is an Aggressive, Stealthy But Luxurious Vision of the Future

5 The Alexis Superyacht Explorer Is the Goliath of All Concepts
Car video reviews:
Coverstory

If modern architecture would float (and sail away), it would look something like this. Apache is the latest superyacht concept from Tankoa, and it stands out from the crowd through striking design and incredible features, some of which have never been done on an actual build of this size.

The Apache Superyacht Concept Has Striking Design, a Flying Pool

The Italian shipyard hardly needs an introduction and, if it does, its vast portfolio should do the talking. Olokun is a good place to start: the custom 50-meter (164-foot) superyacht was launched last year, with a gleaming black hull and superstructure that immediately drew Darth Vader comparisons, and with good reason. It’s definitely one of the most striking and memorable launches of 2020.

Apache could be next, if things work out. It’s a concept for the time being and was officially introduced at this year’s Monaco Yacht Show, with Tankoa CEO Vincenzo Poerio noting that the yard was already showing it to potential customers. At 76 meters (250 feet), it’s bigger than the aforementioned Olokun, but equally striking, thanks to the work of designer Alberto Mancini.

The aluminum hull and superstructure draw for inspiration on modern architecture, with straight lines in all directions, a clean and sleek look, and minimized bulwarks so as to not hinder views out on the water. Tankoa says Apache’s shape resembles the feathers on an arrow, and the comparison is apt, as the video at the bottom of the page shows. Apache is based on a new technical platform.

Apache is elegant and sophisticated, but it’s also packed with incredible amenities. Among the highlights is the flying pool, which isn’t actually flying (duh!) but would create this impression in swimmers.

It’s practically a glass-bottomed suspended pool on the main deck, on the private terrace of the owner’s suite, which allows light to filter through the water into the gym and the lounge below. The owner would walk out on this terrace and the pool through a corridor with another water feature encased in the floor. During the presentation, Tankoa highlighted that, if Apache is commissioned to be built, it will become the first vessel of its size to feature a pool of this kind on the foredeck.

Two more pools are available aft, including a floodable infinity pool with walls of glass on the beach club. The beach club is, on its own, a standout feature with this superyacht, in that it features folding side terraces and offers an “upscale resort space” measuring 125 square meters (1,345 square feet). The folding terraces are made of one-way glass, out of a desire to not spoil exterior aesthetics. The beach club is connected to the sizable tender garage, which, when empty, can serve as an additional lounge space.

“I wanted to avoid the typical cave dark effect that today we see in many beach clubs,” Mancini says of the unique beach club. “Indeed, Apache’s beach club design is not just an area for accessing the sea to be enjoyed only when anchored during the day; it is fully integrated with the main deck salon so it can be used day or night as an extension of the outdoor living space.”

Beside the owner’s suite, Apache offers accommodation in four guest cabins on the main deck and a VIP suite in the bow. Crew quarters, as well as the industrial-grade galley and crew mess, laundry and storage rooms, are all situated on the lower deck. The interior is elegant and welcoming, with a combination of suede, precious woods and soft fabrics.

Amenities also include the gym, a third pool, a semi-open foredeck lounge, formal dining and a socializing “hub,” a cinema, and a couple of observation rooms that offer panoramic views out on the water.

Tankoa would offer two propulsion options for Apache: twin CAT or MAN engines that would deliver a top speed of 16.5 knots. At a leisurely cruising speed of 15 knots, Apache would have a range of 5,000 nautical miles – more than plenty to fully take in the incredible experience it would offer. 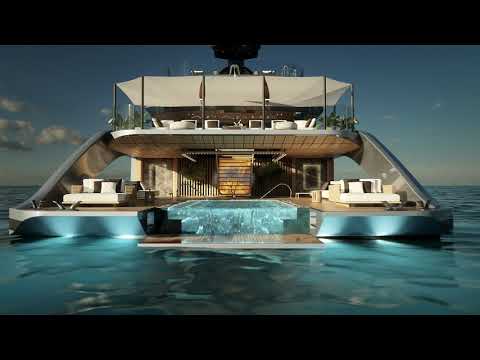