The car we’ll cover today is chassis number 90080, the same Alfa Romeo 155 the ex-F1 driver almost rolled at Donington Park all those years ago. Tarquini won the drivers’ championship in Silverstone with this very machine, which was subsequently employed for pre-season testing in early 1995.

Reconditioned to original specifications by Alfa Corse, the vehicle was gifted to Gabriele as a gift from Italian motorsport legend Giorgio Pianta. Those who don’t recognize the name only need to know that Giorgio tested for Fiat, prepared the Lancia 037 and Delta S4 for rallying duties, then he was awarded the role of team manager at Alfa Romeo’s racing department.

Presented in tip-top condition inside and out, 90080 is one of the most celebrated touring cars of the British Touring Car Championship series and the world of motorized sports as a whole. The sedan has been in Tarquini’s ownership since new, but the time has come for another owner to enjoy it.

Unfortunately for the BTCC-spec 155, the peeps at Vauxhall got the better of Alfa Corse in the teams’ championship, Renault won the manufacturers’ championship, and veteran John Cleland secured the drivers’ title in 1995. 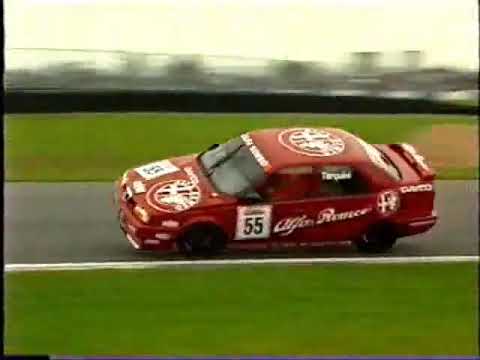