5 The Cervélo R5 Is What Your Lamborghini Aventador SVJ Looks Like on 2 Wheels
Car video reviews:
Editorial

It’s not that most cyclists don’t care about how pretty their bicycles are, regardless of whether they’re traditional, pedal-powered bikes or of the electric variety. It’s that a bike is meant to be practical first and foremost.

The Akhal Bicycle Is How You Turn Cycling Into High Art

British design house Extans says it was able to create a bicycle that is both functional and visually outstanding: the Akhal. Introduced at the end of last year in two versions, Akhal Shadow and Akhal Shine (one in volcano black, the other in silversand white), this bicycle is often referred to as the most beautiful in the world, a rare Ferrari of the cycling world.

Akhal is, without a doubt, a striking bicycle. With a design inspired by the Akhal-Teke, one of the oldest and rarest purebred horses in the world, it’s meant to evoke the same kind of feeling as that majestic creature: awe, strength, perfection. It’s also meant to disrupt bicycle design altogether while filling in a perceived gap in the market for luxury bikes.

“With a reputation for endurance, intelligence, and a distinctive metallic sheen, our pure form faithfully reflects its namesake, with the stunning black and shimmering golden cremello coats of these horses inspiring the design of the Akhal Shadow and Shine editions of the bike,” Extans says in the description of the Akhal bike.

The entire Akhal lineup comprises only 99 items, all of them made to order by hand (not manufactured) in the UK. There is a lot of emphasis on how these bikes are equal parts works of art and equal parts functional bikes, starting from the vague description on the official website and the occasional, rather nonsensical floating quotation like “we don’t make limited editions, as every edition is limited.”

But there’s no denying that this is a truly beautiful bicycle. Akhal stands out for its clear and clean lines, stark minimalism and the promise of unmatched performance. Whereas it’s clear that much of the focus has been on creating a visually pleasing bicycle, Extans says they were just as invested in making a product that stands the test of time.

To that end, only the highest-quality materials were used. This is a pedal-powered, traditional bicycle, and it’s a single-speed city bike, which means Extans was able to cut down on components to a maximum, in keeping with the minimalist aesthetic.

The lightweight, rigid carbon fiber monocoque structure offers good lateral stiffness and “excellent” vibration damping, which, in turn, promise a smooth city ride. Structural parts are CNC machined from a single aluminum billet for structural integrity and the most seamless design, while the fork, seat post, and stem with handlebars in full carbon. The saddle is made from Fabric Scoop, and Shimano Dura-Ace modules offer total control.

Akhan rides on Pirelli P Zero tires 28-622 and comes with Gates Carbon Drive CDX transmission with single-speed gear for minimum maintenance and longer lifespan. Extans offers just one frame size for riders between 170 and 195 cm (5’5 and 6’4) tall, but each bike, whether a Shadow or a Shine, can be further customized according to the future owner’s desires. If the future owner can afford it.

This bike weighs 9.5 kg (21 pounds) and, when not in use, can be exhibited just like one would an artwork, thanks to a forged carbon bike floor stand: “a sculptural piece for one who appreciates the crafting skills for showing it off in modern interiors,” says the design house.

“The Akhal has been shaped with energy, harmony and balance, poised with elegance yet employing a design language that embodies movement and finesse,” Extans further says. “The Akhal inspires a strong emotional connection between rider and bespoke bicycle, with a refined beauty beyond its competition and designed to elevate the riding experience.”

By the sheer amount of fancy words used to describe it, the limited production, and the emphasis on how this is a work of art, you probably guessed what’s coming: pricing on the Akhal is only available on request. We’ve reached out to Extans for some clarification on pricing and will update the article accordingly when (and if) we’re offered a quotation.

In the meantime, it’s probably safe to assume that the old adage of “if you have to ask, you can’t afford it” applies. Here is Akhal in motion: it is so beautiful, you can ride in loafers. *Update:
We heard back from Extans regarding pricing on the Akhal, so here it is: the Shine is £14,900 ($20,060) with VAT, while the Shadow edition retails for £18,800 ($25,310) with VAT, to which you add transport fees. Extans emphasizes the bike’s collectible status, which is more than apparent in its pricing. 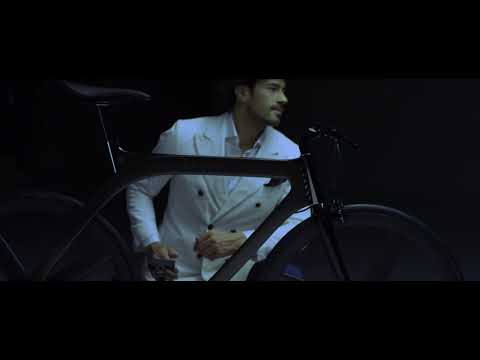