BAE Systems, a British multinational defence, security and aerospace company headquartered in London, has recently unveiled a couple of their newest futuristic concepts. Engineers expect 3D-printed drones, self-healing aircraft and airplanes that can split apart, to reach the market in less than 30 years.
1 photo
All you Transformers fans out there, it seems you were right after all, the day when flying vehicles change their shape while in the air is close. It might not be trucks turning into gigantic robots, but these concept airplanes are still mind-blowing.

Named Transformer, one of the ground-braking technologies the scientists are working on is a flexible aircraft system that uses smaller jets. They fly as one for more efficient travel, before having them split apart to quickly adapt to any scenario.

This technology would allegedly help with lowering the fuel consumption and increase the range of the jet. Once the smaller sub-aircraft reach their objective, they all reunite and adapt to any given situation - whether that means going on the offensive or performing functional tasks such as surveillance or the dropping of supplies.

If that didn’t make your jaw drop, then the next one will definitely will. The Survivor technology allows jets to quickly heal themselves from damage sustained during a flight. It features a lightweight adhesive fluid inside a pattern of carbon nanotubes from which the aircraft is constructed and is released when damaged, to quickly ‘set’ mid-flight and heal.

The Fighter aircraft is yet another ground-braking concept that would be the world’s leader in battle. It features Directed Energy Systems, an attachment weapon for aircraft that is capable of firing a concentrated beam of energy at the speed of light.

BAE Systems is also working at an aircraft that would implement 3D Printing technologies, through which smaller unmanned aircraft (drones) could be created while the machine is still in the air. The UAVs are created by super high-tech on-board 3D printers, via Additive Layer Manufacturing and robotic assembly techniques. The machines would respond to data fed to them by a remote control room where a human commander decides what should be produced. 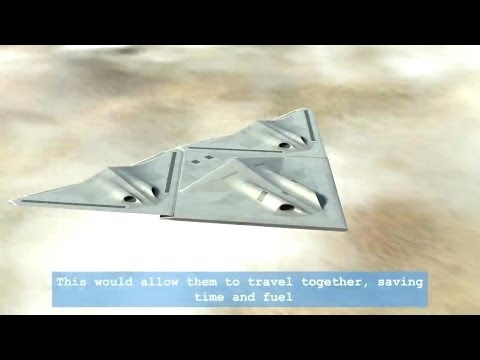