2 This Futuristic 3D-Printed Thingy Is the nFrontier UILA, a Car and e-Bike Hybrid

3 The "M" Rapide Is Angell Mobility's Idea of a 21st-Century Two-Wheeler, and It's Electric

Ford Builds Its 150,000th Mustang Mach-E and Plans To Sell It in 37 Countries Worldwide

The recent interest in green mobility has sparked a plethora of companies aiming to land their vehicles in your garage. One crew worth noting is Canada's Lyric Cycles and the tasty motorcycle-o-moped e-bikes they build.

Lyric Cycles can be considered a Canadian EV startup that aims to offer not only eco-friendly machines, but ones that you can regularly use to get around town and to do so riding a rather flashy machine. However, their manufacturing knowledge dates back 20+ years, so let's explore the freshest addition to their family, the Graffiti.

Until this point, Lyric unveiled just two machines, the Voodoo and the 305 Ghost. Starting with the Voodoo, we are being offered a café racer style EV that can reach a top speed of 65 mph (105 kph) with an 18,000-watt peak motor. Yes, it even has pedals, just in case you get pulled over and are trying to prove that the radar gun is glitchy - "There's no way I can hit 65 mph on a bicycle, officer." The 305 Ghost, on the other hand, is the more fashionista sibling of the family, having been conceived hand in hand with the one and only Tyson Beckford. As for pricing, the least expansive of the two is the Voodoo, cruising in with a price tag of $7,000 (€6,750 at current exchange rates). The Ghost is $7,500 (€7,200).

However, this meant that Lyric were aiming rather high on the price ladder, and so, to help them capture a bit more of the market, the Graffiti was born. Lyric didn't say this themselves, but with an asking price of $3,100 (€3,000), it looks like Lyric are trying to slowly creep their way into your home. Let's see if they should.

For this version of Lyric's work, the tremendous speed available to the previous two models is no longer available. Considering you need a license to ride the Voodoo and Ghost or take them out on a closed course, the Graffiti opens up a wider customer base with a top speed of 38 mph (61 kph). Still, I'm not sure that's road legal, so please exercise caution while riding around on full blast.

Legally, you should have a scooter or motorcycle license for most states and countries, but check local laws and regulations. However, Lyric mention that this speed should only be unlocked and used on private land; city streets mean you should be riding around at the Graffiti's Class 2 setting, 20 mph (32 kph).

That speed is made possible by using a 2,500-watt motor mounted to the rear wheel. Powering all that magic is a 17.5-amp-hour battery that can offer a range of over 50 miles (80 kilometers) on a single charge. Sure, that's in optimum settings, but the ability to add yet another pack doubles your range. A regenerative braking function is also present.

All that's mounted onto a frame built out of aluminum, but, once again, Lyric are sticking to the whole café racer styling. The Graffiti's frame is much barer than its brethren, we can still see that retro style present. I've seen this shape on other electrified two-wheelers too, and hopefully, it isn't China that's responsible for this one too.

Tying things off is a belt drivetrain from none other than Veer? Yup, no Gates here, but another name in this growing industry that's been around since 2016 and was born in Northern California. Take a look at the image gallery to notice the differences between the two drivetrain manufacturers. To soften your urban adventures, a front fork with 120 millimeters (4.7 inches) of travel and 3-inch cross-section tires is thrown on.

Now, I understand that it may be hard to figure out if this EV is for you by sitting around doing what you're doing. So, if you want to see what you can ask Santa for Christmas, either find a local dealership with these babies in stock or give Lyric a call and head out to Canada for a frigid spin on their machines. Something to think about over the 25 days or so. 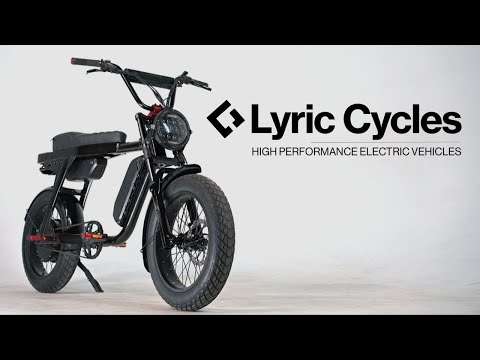 Editor's note: This article was not sponsored or supported by a third-party. Images in the gallery also showcase the Gates Carbon drivetrain, as well as the Veer belt drivetrain.