1 From Unwanted Child To Legend: The Volkswagen Golf GTI That Started It All

5 Volkswagen Apprentices Present First GTI With Hybrid System, It's Just a Project
Up Next

Home > News > Car Profile
Mihnea Radu
This fun yet short review takes another look at three of the hottest Volkswagen Golf models you can buy, the GTI, GTD, and GTE.
2 photos

All of them received a mid-life facelift late last year, including slight bumper revisions, new LED headlights, and taillights plus added screens inside. But which is the one you should buy? Well, we agree with the review on this matter. It's the GTI, not because it's a classic formula, but because it's simply better.

You see, it's the only one that also got powertrain changes. The base model now makes 230 HP instead of the usual 220, while the performance pack goes up to 245 HP and 370 Nm of torque (15 HP and 20 Nm more). The car is also optionally available with a 7-speed DSG now.

The hot hatch is supposed to be a jack of all trades - fast, fun, practical and relatively affordable. Sure, the GTD is more frugal, but it's more of a poser with sporty looks wrapped around a TDI. If that's what you're after, why not get a 1.6 TDI with the R-Line package?

It's not like the regular GTI isn't frugal either. Thanks to its multitude of driving modes, the hot Golf can take you to work every day in relative comfort. It also sounds good when you rev it, while the GTD deliver a pleasant "engine sound" in the cabin through the soundaktor system.

Just like the diesel hot hatch, the GTE plug-in hybrid didn't get any more power for 2018. In fact, its 1.4 TSI engine has been made obsolete by the 1.5 TSI. Because of the on-board batteries, there's less performance and trunk space here.

Ironically, it makes more sense than the GTD because it's the only plug-in hybrid Volkswagen compact, plus it's well equipped and fun to drive... for a green car. Of course, we'd stick to the GTI, though. 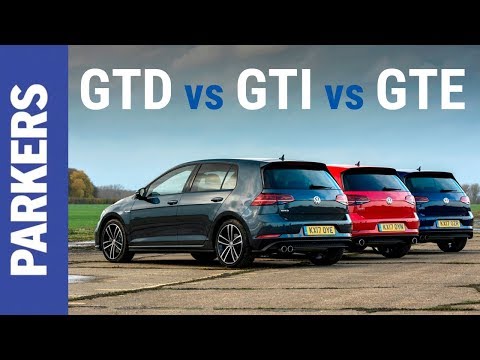