5 2016 BMW G11 7 Series Will Get Leather Engine Cover, Things Are Getting Out of Hand
Coverstory

Home > News > Industry
Gabriel Nica
It seems like BMW is taking its entire fleet to the ‘Ring these days, as soon as the circuit opened. The latest shots from the Green Hell feature the upcoming G11 7 Series and what we think is a new V8 engine. Not only that but the driver seems to be taking things to the limit in the limousine.
4 photos

The car sounds so good that the man that was recording it on the Nurburgring posted the video on YouTube saying that this is the new M7. Unfortunately, there’s no such thing in the works at the moment and if we were to take a wild guess, we’d say that this is just the upcoming 750i model, powered by the same 4.4-liter V8 biturbo plant from the current car, only slightly improved.

Based on our sources, the 450 HP output of the N63 plant will be improved, taken closer to the 500 HP limit along with some more torque to keep things interesting. Coupled with the weight reduction the entire G11/G12 range should boast, this thing should be a great 7er both in carrying around dignitaries and VIPs but also as a getaway car.

It’s more than interesting how BMW is testing its new flagship. The brand also boasted with its driving dynamics and we’re expecting the new limousine to also be a reference point in its segment.

As far as the rest of the technology on-board goes, the 7er is supposed to bring a lot of new features to the market. Starting with the laser lights up front and organic LEDs inside (and out, respectively inside the taillights) going to the new materials used throughout and the new iDrive system with touch-sensitive screens and gesture recognition everything will be new.

There’s even going to be an augmented reality feature that will be projecting information ahead of you, keeping you informed regarding all sorts of data around. The new engines will also be more efficient and have more power while plug-in hybrids will be introduced in more than one guise. Chances are we’re going to see a 740e and a 750e model at the very least with the former using a 2-liter 4-cylinder petrol engine and the latter using a 3-liter one.

In the meantime, let’s enjoy the beautiful sound of the future 7 Series’ V8 and wonder how great it would be to finally have an M7 in the range... 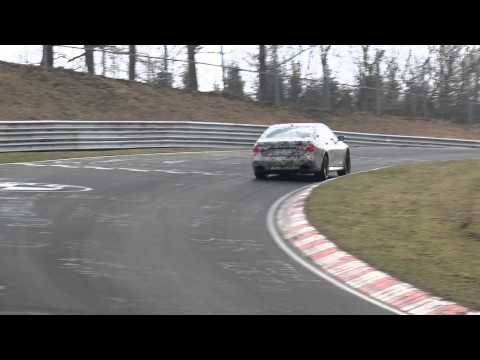