5 Iggy Pop’s 1984 Ferrari 308 GTS Could Be Your Cheap Ticket Into the Club
Car video reviews:
Up Next

To paraphrase a very popular meme, Ferrari doesn’t always build boats, but when it does, it builds rockets on water in an almost literal sense. Now’s your chance to get your hands on it.
11 photos

Dubbed the “ultimate Ferrari for the ultimate Ferrari collector,” this Ferrari boat goes by the name the Arno XI and is actually a racing hydroplane built in 1952. It started as a wild idea by speedboat racer Achille Castoldi, who was looking to set a new speed world record for the 800 kg (1,763 pounds) category.

To that end, he commissioned the Cantieri Timossi shipyard to build him a 3-point hydroplane hull from hardwood, which he would then power up with a 4.5-liter, V12 Ferrari engine. Castoldi bought the engine himself but, when Enzo found out that he’d painted the hydroplane in Ferrari’s colors, he sent out his engineers to check it out in person.

Eventually, Enzo would also become involved in the project, determined to help Castoldi secure that world record. This would happen in 1953, after the engine was replaced with one similar to that found in the Ferrari 375 F1 that gave the Prancing Horse its first Grand Prix victory in 1951. The record still stands to this day: 150.49 mph (242.19 kph).

The original racing engine on the Timossi-Ferrari “boat” blew up after the new record was set. The racing hydroplane is now being restored and will be certified by Ferrari Classiche, and carries a 4.5-liter Ferrari V12 again.

The best part of this strange story, though, is that the hydroplane is up for sale again. It is currently listed with the DuPont Registry, but you have to call for a price. In mortal-speak, this means it’s more than us average folks can afford – and a clear indication in that sense comes from the fact that, in 2012, it sold at auction for €868,000 (roughly $1,013,000 at the current exchange rate). 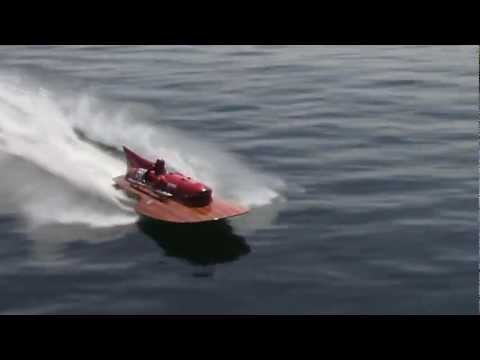