1 Remembering the 1937 Hunt Housecar, the First Private RV With a Functional Shower

2 1949 Pontiac Streamliner Ambulance Wants To Be a Hot Rod, Needs a Heart Transplant

5 Stout Scarab Is the World’s First and Ugliest Minivan, Now an Art Deco Icon
Car video reviews:
Up Next

Marketing in general, and commercials in particular, play a vital part in shaping public perception of a new product. These days, marketing fabricates new needs that are satisfied by that same product, but back in pre-war times, it was the means to showcase products in real-life scenarios.

Here is an automobile that is equal parts a beautiful piece of automotive history and an excellent instance of marketing and, because of it, a perfect fit for autoevolution’s Commercials Month, which runs through the entire month of October. This is the McQuay Norris Streamliner, one of the six units ever produced and the only one still in existence today.

Seeing is believing, and McQuay Norris, a St. Louis, Missouri-based maker of automobile parts like chassis parts and piston rings, knew that the best way to prove the superiority of its products was by integrating them into a real vehicle that people could see, touch and experience. In 1933, it ordered the construction of six such automobiles to serve simultaneously as displays and test units, using the chassis of different brands but with a new body by Hill Auto Body Metal Company of Cincinnati, Ohio.

They called these vehicles “aluminum eggs” because of their unique but, at the time, quite popular and decidedly futuristic shape. This is one such example: a 1934 vehicle, based on the same model-year Ford, and the only one that has survived to this day.

You can still see it if you’re ever in Nashville, Tennessee, on display at the Lane Motor Museum after founder Jeff Lane bought it from classic car dealer Mark Hyman from St. Louis. The Lane Motor Museum specializes in rare and odd cars and boasts of being the only U.S. auto museum with a section dedicated especially to European vehicles. The Streamliner was a perfect fit in this quirky universe. If you’re never in the area, the videos below and this story should do.

The McQuay Norris Streamliner was nothing revolutionary, either in terms of design or engineering. As far as design goes, other streamlined vehicles had done a much better job at offering improved aerodynamics and passenger capacity, like the Stout Scarab or the Dymaxion before it. The custom bodywork on the Streamliner is not without merit, though. Consisting of a wooden framework with metal skin (steel and aluminum), it’s a good example of what we call today retro-futuristic styling and improved aerodynamics.

In terms of engineering, as Lane himself says in his most recent interview, it was still a Ford, so it drove like a Ford. Lane even says that you could close your eyes, and you wouldn’t be able to tell the difference, except for the fact that there is much less wind buffeting noise inside the Streamliner because of reduced air friction.

Powered by a Ford 221 flathead V8 engine mated to a 3-speed manual transmission, the Streamliner developed 85 hp and could hit top speeds of 80 mph (129 kph). You wouldn’t want to go any faster in it either way since the rod-operated brakes make stopping distances much longer and braking itself a much more challenging operation.

This Streamliner rides on 16-inch wheels and features a panoramic plexiglass windshield that creates what Lane calls the “fishbowl effect” because the driver sits farther in the back and has excellent surround visibility (except for the rear). The windshield also helps in the rain, because water just slides off so the vehicle doesn’t need wipers.

Two vents on each side, operated manually, offer cross-ventilation inside, and there’s seating for two. Because McQuay Norris asked for a custom wooden dashboard to include the variety of gauges they had to monitor the performance of their parts, the passenger seat is located a bit farther in the back than the driver’s seat. Even with both seats placed almost in the center of the vehicle, there is still room for some luggage behind them.

According to the Lane Motor Museum, this unit included a blowby meter that was used to measure how well the piston rings and valves were sealing and a viscometer to monitor oil viscosity. Both were lost over the years.

Lane says this unit traveled extensively across the United States and Canada, together with its other, now-defunct siblings. All were retired from the road at the start of World War II, which may or may not have pushed McQuay Norris into bullet production. This sole survivor defied all odds and now stands before you as a nearly-forgotten piece of automotive history and an example of awesome marketing. 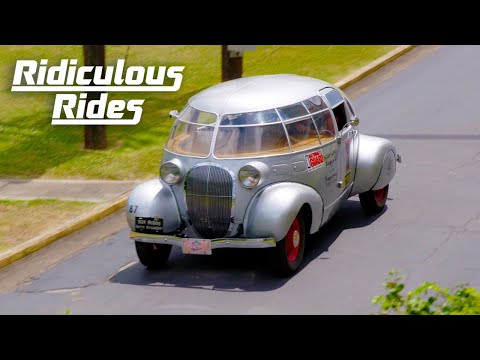 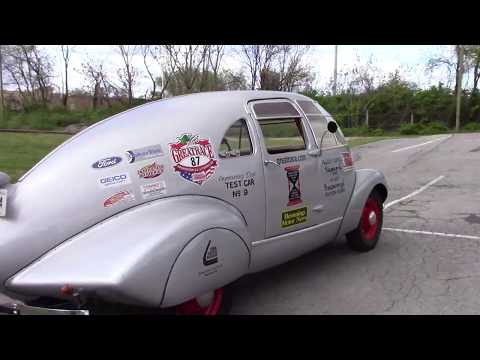