5 TFL Tests the Ram TRX in the Snow, Standard Tires Are Alright for Winter Driving
Car video reviews:
Up Next

Land Rover’s new Defender isn’t the “agricultural-inspired” utility vehicle of lore and has now turned into a premium three-row family hauler. That is one of the main reasons why The Fast Lane Car guys have decided to set up a confrontation with the 2021 Toyota Land Cruiser Heritage Edition and the recently refreshed 2021 Nissan Armada. Another reason would be that they wanted all three to prove their off-road credentials in a snowy Colorado setting.
36 photos

With The Fast Lane and a Land Rover Defender involved in the story, you can be sure the description’s “Will they all make it out in one piece?” is actually warranted. Still, they did not get involved with a rock crawling situation – first because they were in a snowstorm, second due to the high prices of the tested rigs, and third on account of just one of the SUVs having the right tires for the challenge.

That one would be the Defender, which comes with a set of optional tires – as opposed to the factory-equipped Land Cruiser and Armada, which have the usual all-season rubber. That is also the reason why TFL’s vehicle is used for assistance... although it might be the one calling for most attention in the end.

Everything starts (from the 1:26 mark) with the Colorado setup presentation and TFL’s guest reviewer... a puppy named Blaze. From the 3:11 mark, each vehicle gets its own introduction – the Land Cruiser is a flagship Heritage Edition, while the Armada fans are reminded of the Patrol connection.

The first one on the trail is the updated Nissan (4:31), and we can already see the setting in play – the dog gets to see if the liftgate is too high or not for getting on board by itself, and only then the humans start discussing their stuff. You can check each vehicle’s section of the trail from the 9:55 (Land Cruiser) and 19-minute (Defender) marks.

That’s not all, though, because we have some interesting action interspersed in between. First of all, we have the first Defender “breakdown” from the 6:51 mark, where the vehicle gets a suspension fault warning. That’s easily dealt with – after an on/off power sequence, the issue is gone.

The engine talk starts at the 8:20 mark, while the off-road technical stuff – basically explaining why they didn’t go rock crawling and only did some mild trailering – comes from the 14:19 mark. Naturally, we also have a second Defender problem, which can be judged from the 15:40 mark. It has something to do with a possible engine coolant sensor...

By the way, they did make it back to base without further issues, and they now have high expectations for the Defender as it approaches the 600-mile mark, setting up a future confrontation with a proper off-roader – their long-term Toyota FJ Cruiser. 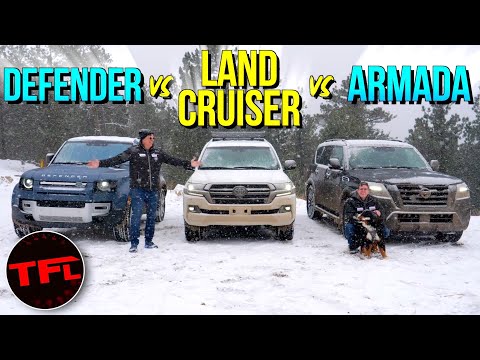