As you’re well aware, Ford’s all-electric pickup comes in four distinct flavors. The Pro is bottom of the list, a work-oriented pickup available from $39,974 with the 230-mile (370-km) standard battery for retail customers and 320-mile (515-km) large battery for fleet customers.
11 photos

Reserving the larger battery for fleets isn’t that big of an issue considering that retail customers aren’t really interested in the Pro. The better-equipped grades begin with the $52,974, followed by the $67,474 Lariat in this video from our friends at The Fast Lane. The Platinum starts at $90,874 before destination charge, and surely enough, it gets the large battery with 300 miles (483 kilometers) of driving range due to the extra heft of its goodies.

Every F-150 Lightning is rocking a dual-motor powertrain that was initially rated at 426 and 563 horsepower depending on battery capacity. Later on, the Dearborn-based automaker published the official numbers: 452 and 580 ponies in addition to 775 pound-feet (1,050 Nm) for both battery options.

The Pro in the featured clip is chassis number 009 as per the specifications provided by the Ford Motor Company, which also reads large battery and many other goodies. On top of the Equipment Group 110A that’s completely standard for this grade, the pickup further boasts the Tow Technology Package, Max Trailer Tow Package, and the Tough Bed spray-in bedliner.

Including destination, total price as equipped is listed at $56,109. At this price point, it’s uncanny the steering wheel isn’t wrapped in leather. But on the other hand, Ford is notorious for cutting corners where it should not because that’s how the beancounters save the automaker precious money.

The Lariat, which bears vehicle identification number 027, is rocking the large battery that costs $10,000 more than the standard unit, 275/60 R20 all-terrain rubber instead of the standard all-season tires, the Max Trailer Tow Package, and Tough Bed spray-in bedliner. Including the $1,695 destination charge, this configuration is a ridonculous $80,739 as per the spec sheet.

Truth be told, the exterior, interior, and techy stuff are noticeably better. 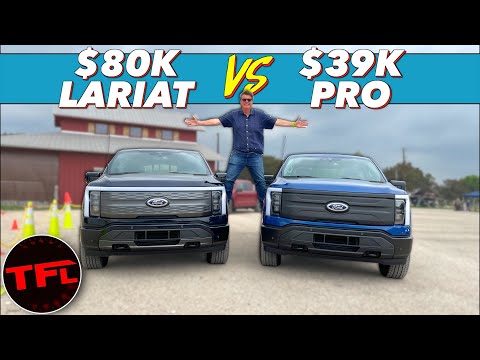