3 TFL Reviews Toyota 4Runner vs. FJ Cruiser vs. Lexus GX On the Road

TFL Buys Three Cheap Trucks, Not All of Them Are for New “Hell and Back” Series

Home > News > U-turn
Aurel Niculescu
When Roman Mica, the presenter and publisher of TFL, starts a video with “this has been the craziest week of our ten-year career here at TFL,” we’re all eyes and ears. Granted, that also happened after we noticed that “Holy Grail” orange truck Roman and Tommy were so proud of displaying.
17 photos

As far as crazy adventures go, the guys over at The Fast Lane (Car, Truck, Classic, Off-Road – they have them all) have a special page in our fun book. And they’re certainly doing their best to grow it into a full chapter, by the looks of their latest projects.

That’s because even though TFL has started amassing a good number of crazy ideas, they’re constantly on the lookout for even more. For example, Roman doesn’t even kick off the proceedings with the trucks (from the 3:15 mark) before giving us an update on their “Baby Yota” Tacoma.

And it seems no snowstorm is going to deter them from accomplishing their set of goals, even though Tommy jokingly confessed that he needed a new pair of underwear after a particular journey - be sure to also check out that side story from the 9:45 mark if you want to know more.

Well, as it turns out, the Ram and Chevy will be an integral part of an upcoming series entitled “TFLtruck’s To Hell and Back,” which involves taking three older trucks (the already mentioned Ram and Chevy, as well as a Ford they haven’t purchased just yet) on an adventure to Moab, Utah... and back, if the trio manages to survive.

The likelihood of seeing all three making it out alive depends entirely on their ability to survive the renowned Hell’s Revenge, though. Just to make matters more interesting, the trucks can be acquired on a very specific budget (no more than $5k for each) and then upgraded with some additional $1,500 from TFL’s partner for the series.

So what's with the 1965 Ford F-100 4X4, which appeared in place of the newer Ford F-150 4X4? It turns out an opportunity arose while they were on the lookout for their third truck for the new challenge. Roman calls it the “Holy Grail” of classic trucks because all-wheel drive pickups from the 1960s are notoriously difficult to find.

Hopefully, by the time they get their hands on an F-150, Tommy will also be ready with the planned upgrades for the 1965 F-100, and they’ll take the classic truck along for the ride just for the fun of it... 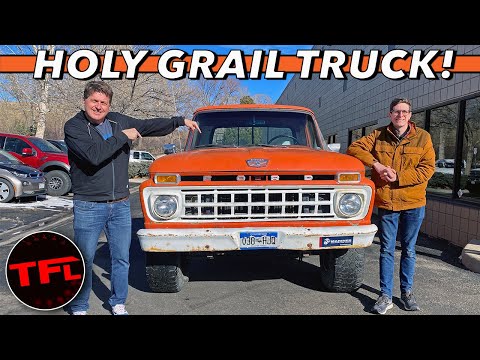