Remember what happened when Tesla first introduced the Autopilot function? That quickly degenerated and forced Tesla to alter the settings of that feature a little so that it didn’t land a huge lawsuit on its head.
1 photo
Now, all Tesla owners have another little gizmo to play with. It’s called “Tesla Summon” (because it sounds so much better than Autoparking) and it’s basically a way of having your car park by itself, while you’re not in it. Wait, don’t other car makers have the same feature? Yes, they do, but apparently Tesla owners are much bigger tech-geeks. Who would have guessed, right?

As it stands now, though, people are still trying to figure out everything it can and can’t do, as the clip below demonstrates (“let’s hope it stops before it hits me” should be a very eloquent example).

The basic idea is that both Model S and Model X Teslas with the v7.1 update installed can now be issued the order to park either frontally or in reverse using just the key fob (or a smartphone app, as shown here). The car can also open or close the garage door as necessary and will steer itself towards the owner’s location by itself.

Some early clips of Tesla cars in action weren’t that spectacular, and its precision when parking based solely on the markings on the ground left a lot to be desired (yet that might have been down to the poor positioning of the owner). But since it is only the first implementation of the system, it’s fair to say it will evolve over (a short period of) time, and it will eventually perform flawlessly.

The big question mark concerning this clip in particular (even though the same would probably happen should somebody else try the same thing in a Tesla Model X) is why does the spoiler pop out once the car engages reverse? Is it just a “hey, look at me, I’ve got an active rear spoiler” bragging moment, or is there more to it? Since it does sit over part of the rear window’s glass, it could be that it does so for maximum visibility when the driver is in the car, and somebody forgot to disable the feature when the car is being summoned. 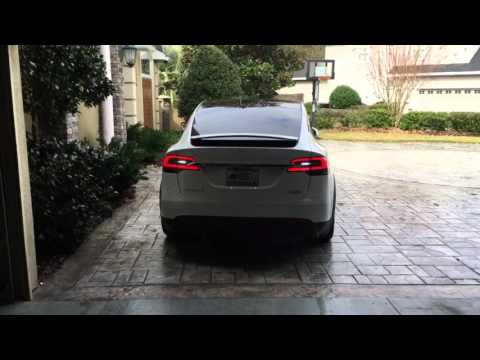