5 The Tesla Autopilot Syndrome: "Why Didn't the Car Avoid the Crash for Me?"
Car video reviews:
Coverstory

After the initial surge of videos that followed the limited release of the Full Self-Driving Beta feature a little over a month ago, the rate at which they pop up on the Internet now has begun to drop down.

Tesla with FSD Beta Avoids Plastic Bag, Some People Mistake It for a Good Thing

People are getting used to what the system can and can't do, so they know it takes something out of the ordinary to warrant everyone's attention. Well, not everyone's because some people, as it turns out, are very easily excited. How else would you explain the fact that a video showing the car swerve slightly to avoid an empty plastic bag on the road received so much attention?

So, here's what happened, in case you can't be bothered to watch the video. A guy driving his Model 3 with the Autopilot on (running FSD Beta 6) signals to merge on a highway. Just as the vehicle begins the maneuver, it spots a plastic bag moving on the ground, so it moves to the right and, once the menacing bag had been cleared, it resumes the merge. There didn't seem to be any cars around, so it all looked completely safe.

How did people react? Let's just say "OMG" was used a lot. The question is, why? What's so great about the system deciding to avoid an obstacle most human drivers would have identified as being completely harmless and, depending on the situation, decided to drive over it or, if safe, avoid it?

Are they impressed with the fact the system's cameras picked it up? Well, it was about the size of a small dog and it was moving, so you would hope they'd be able to see it. Otherwise, little Fido, the neighbors' dog, could be in big trouble.

In reality, this situation brings up two questions we don't (and won't) have an answer to. The first one is whether the vehicle's system actually identified the object, or simply knew something was there. We don't expect it to say, "it's a three-day-old plastic bag from Walmart used to bring home two pounds of bananas and three pieces of bread", but rather to know whether it's an obstacle that's safe to run over or not.

The second question is tied to the first and asks how the vehicle would have reacted if the situation was different and there were cars around. If, say, there were cars on each side, what would have Autopilot done? Naturally, it wouldn't have swerved if that meant hitting another vehicle. Still, the system would have been forced into making a decision, and since going around wasn't an option, it was only left with two more: go over, or brake.

The fact it swerved when it was clear suggests the former is not its preferred option, so it most likely would have braked. Now, imagine there was another car behind - would its driver be surprised by that? Maybe even taken off guard? Of course they would be, particularly since as far as they’re concerned, there was absolutely no reason to do that.

The human driver can't see a million things a second and process them all at the same time, but they can make more sense of the fewer things they do see and process. That's not a dig at AI in general, but strictly at the level these systems are at right now,  's Autopilot included. Still, some people think this level is advanced enough to allow allegedly full self-driving vehicles on public roads. In their defense, it's easy to lose focus when so many other people are going out of their minds over a vehicle swerving for a plastic bag and calling this the greatest thing since sliced bread. 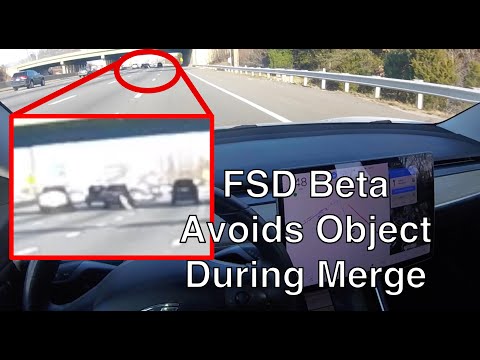