Tesla has sold hundreds of thousands of vehicles globally, but a big chunk of those cars didn't go too far from the factory where they were built. Indeed, it's no surprise that California is big on electric vehicles and having arguably the best brand's plant next door made choosing which one to buy a lot easier.
1 photo
A growing number of vehicles on the street draws a few other consequences, some more desirable than others. For instance, you'll get a wider variety of third-party accessories and parts for the vehicles, as more potential buyers make the Tesla brand appealing to companies specializing in aftermarket retrofits.

One other connected market that's bound to grow is the one dealing in used parts. There's nothing wrong with buying things that aren't new, but that always comes with one risk: you can almost never know for sure the history of your purchase. More often than not, you're forced to take the seller's word for it, and no matter how good a judge of characters you think you are, there's always a dishonest seller that's an even better actor.

So, are you in the market for a new set of original wheels for your Tesla, and would like to pay less than what the company charges for a full set of new rims? Well, according to the LAPD, you should pay attention who you buy them from because thefts of Tesla wheels in Palms and Mar Vista Area are reportedly on the rise. Actually, if you live there, maybe you should go check your vehicle first just to make sure you won't need two sets.

The LAPD Pacific Twitter account also uploaded a picture of a blue Model 3 sitting on a pair of crates (pretty sturdy ones) with all of its wheels missing. Well, at least the two we can see, but there's no reason to imagine the other half was spared.

Soon after, another user posted another picture of a white Model 3 in Venice that had suffered the same fate. Someone pointed out that the wheelless vehicle was resting on the same type of crates, suggesting both incidents had the same author.

The LAPD advises owners to switch on the vehicle's Sentry Mode and, very important, to make sure they have a flash drive plugged in to record the events. Also, they say they should park the car in a well-lit public area as often as possible.

It's a bit baffling why thieves would target Teslas, though. First off, even if we did talk about the growing market earlier, it's still relatively small compared to other brands. Most importantly, though, the Sentry Mode makes Teslas the riskiest cars to steal their wheels off, which means these people either have no idea about it or, on the contrary, are very much aware and are taking all the necessary precautions. Which is what you should do too if you own a Tesla in one of the mentioned areas.


Tesla owners in Palms and Mar Vista Area, be aware #Tesla Rims and Tires are a hot commodity in the black market.
** DO ** Activate the #sentrymode and plug a flash drive to record events ¥¥¥ https://t.co/JR7f465BQ2
** Whenever possible, park in well lit public areas. pic.twitter.com/pexeAnMWH0 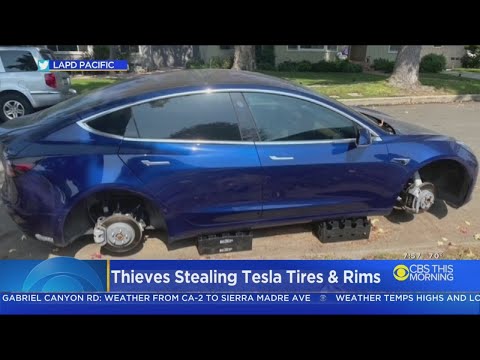