5 Ludicrous Mode Tesla Model S P90D Blasts From 0 to 80 MPH in the Blink of an Eye
Car video reviews:
Up Next

Elon Musk may be the current CEO of Tesla Motors, but we all know the name of the company itself represents a lot more to the world of innovation than the premium sedan model running solely by e-juice. In a way, thanks to Tesla Model S’ success, people once again talk about who Nikola Tesla really was. That is also why peculiar timepieces like the one in question may turn out to be quite a hit.
1 photo
You may have heard of electrical engineer and physicist Nikola Tesla a couple of times, but before Palo Alto, California-based automaker broke the records in the car making industry that was not a common name. Tesla Motors was incorporated in July 2003 by Martin Eberhard and Marc Tarpenning, who financed the company until the Series A round of funding. Musk would join the team one year later, and the rest of the story we all know.

Getting back to the Serbian inventor whose name is on the mouth of every EV enthusiast in California, Tesla was best known for his contributions to the design of the modern alternating current electricity supply system. Guess what? The Tesla Roadster uses an AC motor descended directly from the inventor’s original 1882 design. How cool is that, right?

Well, it’s great enough for gadget makers to ask 60 bucks for a peculiar watch wearing the same name the top selling plug-in electric car in the US has. Here’s how Think Geek is describing this timepiece:

“The Tesla Watch goes with your steampunk aesthetic. With a weathered brass look on all the metal parts, this analog watch features a leather strap. The highlights of this design, however, are the two faux vacuum tubes with red LEDs inside that you can turn on and off with the flick of a switch. Everybody will want to ask you what time it is so they can see your watch. Just remember to follow the answer with ‘...1875.” 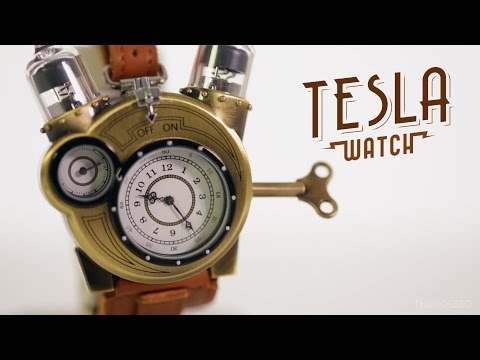