3 Tesla Doesn't Need Advertising When It Has Famous Customers

The Tesla Model X may be the world's first fully-electric SUV, but the one characteristic that really stands out has got to be its falcon doors. Even though a lot of people question their necessity and blame them for the Model X's delay (which happens to be true) due to the added complexity and supplier issues, they still remain the car's defining element.
1 photo
Well, that and the fact that it will put to shame lots of sports cars on the drag strip, but that's not completely relevant here. We're here to talk about the falcon doors and a new feature they got after the latest firmware update. Because, yes, Tesla is the kind of company that gives the doors of its vehicles new functionality via wireless data transmission.

For some reason, Tesla decided not to call the rear doors of the Model X "gullwing door" and opted for the "falcon" parallelism (probably thinking that only fish are afraid of seagulls, whereas falcons are much more widely feared), even though they are more or less identical to what the Mercedes-Benz 300SL had sixty years ago.

As cool as they are to watch and use, there is one problem related to this type of opening: since part of the roof is opened together with the door, the rain/snow is free to enter the vehicle in much larger quantities than through a regular door. Tesla has become aware of that and in its typical fashion has now released an update that's called the "umbrella feature" which is supposed to limit the amount of unwanted elements getting inside the car. But as hi-tech as the car, this solution is rather primitive: just like you would restrict the opening of a power tailgate to a certain height so it won't hit the ceiling of your garage, the Model X's rear doors can now be open about two-thirds of the way.

What's the big deal, right? Well, it's not that big, but it could prove useful for people living in areas with heavy precipitations. This clip (shot in California by a Norwegian guy called Bjørn Nyland with clear Asian ancestry - just pointing out the multi-culturalism, nothing more) demonstrates how the system works.

By opening each of the Model X's two doors differently, the SUV looks like a falcon that's been shot in the wing and now has a limp limb. He says that the lower height of the door is not an issue for him, but he doesn't state how tall he is, so there's no way of telling how that would be for each of us. However, he seems about two inches or so taller than the Model X, so you can decide for yourself. 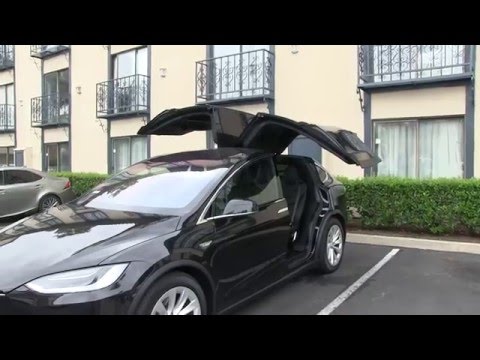