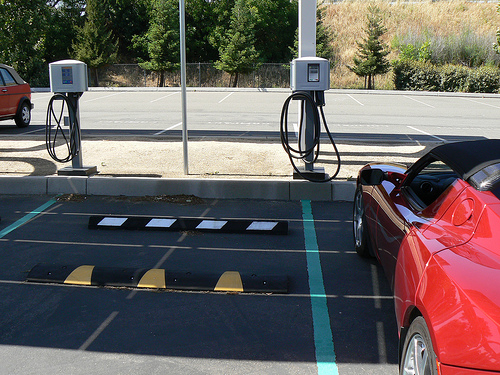 In a bid to make itself more visible throughout Great Britain, one of its biggest markets, American electric vehicle producer Tesla announced it has partnered with several UK-based hotels to install the infrastructure needed for the operation of the EVs.

In all, Tesla will install ten charge stations throughout Great Britain, stations that will be publicly available for free or for a nominal fee. All the stations will deliver 70 amps of electricity, enough to charge a depleted battery in three hours.

To mark the installation of the stations and in a bid to make their location known, Tesla will send Kevin Sharpe, founder of Zero Carbon World (charity dedicated to creating a clean energy future) and EV expert David Peilow on a trip on board a Tesla roadster, a trip that will take the two from John o'Groats in Scotland to Lands End.

Below is the list of location where tourist and EV owners can find the charging stations:

"After crossing the country on a single charge in a Tesla Roadster, I realised that national coverage would require surprisingly few charge stations," said David Peilow. "I worked out the minimum number of sites for all of Britain to be reached, and found locations where drivers would be keen to stop and recharge. Once the benefits of hosting an EV charger were explained, most sites jumped at the chance to have one."