These Ships Plucked Astronauts From the Water After Splashdown, It's a Lost Artform

Cristian Agatie
Elon Musk is confident that Giga Texas, Tesla’s most advanced gigafactory, will reach a cadence of 5,000 units per week by the end of the year. A recent drone video from the factory in Austin shows that Tesla is working hard to reach that number.
9 photos

Tesla fans routinely operate video drones around gigafactories, thanks to lax policing. This sometimes leads to awkward encounters, like the one that caught on camera a couple of Cybertruck workers having the launch. Despite these indiscretions, Tesla still allows the public to monitor its factories using drones. This is why we have so many videos showing construction progress at Tesla gigafactories.

Jeff Roberts is a Tesla enthusiast following Giga Texas’s development since the beginning. He regularly shares his drone footage with the Tesla community. In one of his latest videos, Jeff notes that Giga Texas looks ready to ship an increased number of Model Y crossovers. This seems in line with what Elon Musk said during last week’s Q2 earnings call. According to Musk, Giga Texas production should reach 1,000 units per week in the coming months and 5,000 units per week by the end of the year.

“Giga Texas is definitely ramping up production and shipping of Model Ys this quarter!” Roberts wrote in his latest flyover video description. “Additionally, we’ve got concrete pouring in the Cathode building, more rooftop solar expansion, North end drainage system wrapped up, 20 new v3 SuperChargers in the South end, and the East entrance has glass will soon have doors!”

Although it is now in its early stages, Giga Texas will surpass Fremont as Tesla’s North American factory with the biggest production capacity. The Fremont factory has reached its limits of around 700,000 units per year, with no possibility of building more production lines. On the other hand, Giga Austin should have a 500,000 annual production by the end of 2023 and get to one million units per year with a future extension. This is precisely what happens at Giga Shanghai, which is already gearing up for a 2-million cars per year production once the new extensions are complete. 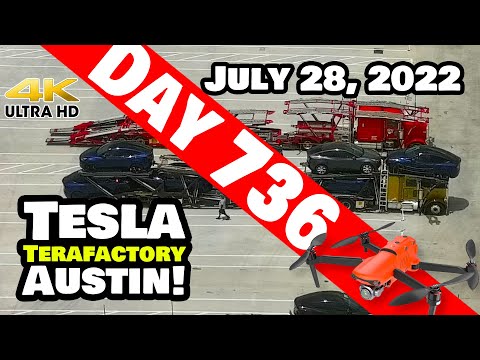