Tesla's V11 Software Update Has a Few Issues, Not Just a Light Show

Tesla's V11 software update also referred to as the 2021 Holiday Update, came with some features but also changed the user interface. The new UI is not as easy to use, owners say, and Tesla is reportedly already considering changing a few things.
10 photos

Most of the features brought by the update appear to have made owners happy, but there's more to a car than a light show. As some owners have complained about on platforms like Reddit, Twitter, YouTube, and forums, the user experience has changed, but not in a clever way.

As some drivers have noted, all the available features are supposed to work with voice controls, but not all work as required if employed over voice control alone. We previously reported on other issues. The size and position of the speedometer have been modified.

Fortunately, there are shortcuts, as you can see in the YouTube video embedded below. However, getting to those shortcuts involves changing habits and “training” your muscle memory to press another point on a screen while driving and then looking away from the road while trying to engage the windshield defroster.

The change has placed icons for Tesla Arcade, Toybox, and Theater on the home screen, which take up space while driving – as they cannot be accessed, but drivers prefer they could continue to see trip information on the screen, as well as tire pressure, seat heater controls, and lighting controls. In other words, Tesla has changed too many things in the interface of its cars with the V11 Software Update.

The changes have angered many owners, who now have to go through several menus or must learn new shortcuts for their most frequently used functions.

On a vehicle that has a fair number of buttons on board, this change would involve moving the buttons overnight, as well as changing the icons on some of them or requiring several presses on button combinations to enable a function that was just one tap away.

As the legend has it, during the design of the first iPod, Steve Jobs insisted that he "should be able to get wherever he wanted in just three clicks." That was a great idea for a hand-held music player, but we think that three clicks may be too much to do on a screen while you are driving.

A Tesla Model 3 driver who goes by the "fishers86" username on Reddit asked if there is a way to turn on the seat warmers in his vehicle without turning the climate control with them. As Teslarati noted, some owners found the new software to come with a "good sprinkling of gimmicky," but has "lots of practical improvements.

The new V11 Tesla Software is the first major update launched after the company's former head of User Interface, Pawel Pietryka, left the American company. That happened back in April 2021, and the new leader has made a few interesting design choices, which provide a “cleaner” design in some aspects, even though ergonomics are below expectations.

Unfortunately, Tesla does not provide a manual for its vehicles that gets updated with the software, which is why some customers have every right to be upset.

The best part about replacing conventional controls with a touchscreen is the ability to fix issues that bother users, but this may be a dealbreaker for some people. The latter part is also understandable and raises a few concerns when considering the purchase of used vehicles that have switched to touchscreen-only interfaces. 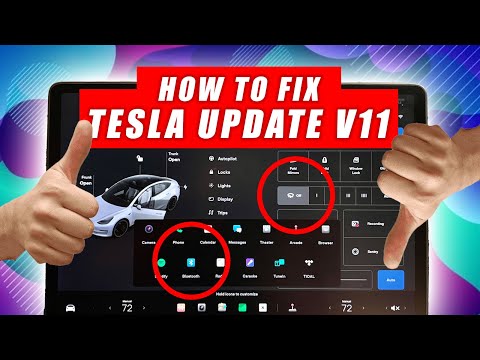 The press release section features Tesla Motors' press release for the Software V11 update. For illustration purposes, the photo gallery features images of Tesla Model 3, Model Y, Model S, and Model X vehicles, as well as images that are related to the V11 software update or the company's multimedia unit.