2 Tesla Model 3 Gets Rendered in Dozens of Colors, Looks Good in All of Them

3 Tesla Model S Update Is Reportedly on the Way, Price Hike May Be Included

5 Tesla Model 3 Prototype Spotted in the Street While Filming
Car video reviews:
Up Next

Gearing Up for the 10th International Female Ride Day

Tesla has recently said that the Autopilot feature now has over 47 million miles under its belt, which is a huge amount for such a short period (it was only introduced last fall). At this rate, Tesla will be gathering enough information to perfect its system way faster than the rest of the companies involved in the autonomous race.
1 photo
But since the Tesla vehicles are clocking these miles out there in traffic, they don't just take in all the information they can, they also make decisions and, sometimes, prevent accidents. Back in October there was that incident when it stopped just short of T-Boning a car that made a dumb left-hand turn, and now we have another case of a clear accident avoided.

Don't get me wrong, it's not like these accidents weren't just as avoidable had a human been in complete control. But the fact that human drivers can prevent crashes (just as they can cause them) is something we know already; it's these systems we don't fully trust yet. However, with no report of a crash coming in so far (except for this rather peculiar incident), we guess the Autopilot does what it says on the box and it does it well enough.

This latest incident involves a Model S traveling on a freeway with the Autopilot engaged and what appears to be a bucket truck that was in too much of a hurry to catch its exit. Here is YouTube user and Tesla Model S owner Joshua Brown explaining what happened:

"Tesla Model S autopilot saved the car autonomously from a side collision from a boom lift truck. I was driving down the interstate and you can see the boom lift truck in question on the left side of the screen on a joining interstate road. Once the roads merged, the truck tried to get to the exit ramp on the right and never saw my Tesla. I actually wasn't watching that direction and Tessy (the name of my car) was on duty with autopilot engaged. I became aware of the danger when Tessy alerted me with the 'immediately take over' warning chime and the car swerving to the right to avoid the side collision.

You can see where I took over when there's a little bit of blip in the steering. Tessy had already moved to the right to avoid the collision. I was not able to slow down even more due to the heavy traffic (cars were behind me). Once I got behind him I slowly added more room between us until he exited."

The Autopilot did well, but I dare say a human driver would have fared even better. A human driver would have noticed the truck's blinker (if it were on), as well as the upcoming exit so it would have slowed down to make room for him to move on the right lane. Mr. Brown says "I actually wasn't watching that direction," but that's only because he had the Autopilot activated and so he felt he could be a little sloppy. I believe it was a situation created by the car's quasi-autonomous mode it also half-managed to get out of, so the praising towards the system should be somewhat limited. 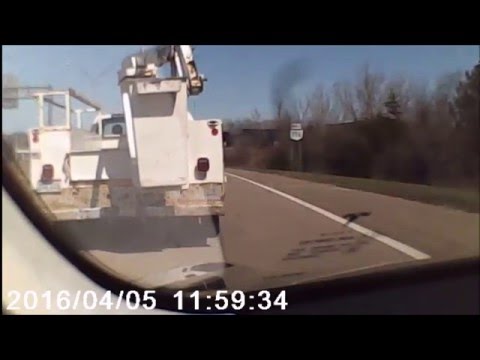