1 Here’s Tesla’s Model S Going Up Against the Rest of the World, Drag Racing – Video

By now, since Tesla rolled out the Insane Mode upgrade for its Model S EVs, we’ve seen tons of cars getting destroyed in drag races, from i8s even to Hellcats. The electric sedan is more than a menace on the track due to a couple of crucial factors, but we’ll get into that a bit later.
1 photo
The thing is, there have been many attempts at making it cringe on the 1/4 mile or 1/8-mile runs, but most cars failed at it. You’d need a Ferrari FF to do that and those don’t come to the drag strip too often. But how about a heavily modified muscle car?

That makes it a menace, indeed but the car it’s going up against has no reason to be afraid. That’s because, by the look of things, it was heavily modified to deal with such situations.

It’s an older C6 Corvette that was seemingly supercharged into oblivion and fitted with some nice drag wheels and slicks for the perfect amount of grip. According to the video uploader, the car was putting down in excess of 700 HP and we believe him considering that it posted a 1/8 mile run of 6.09 seconds with a trap speed of 104.39 mph (168 km/h). Even so, it was all in the handling of the car as we've seen 700+ HP cars being torn to pieces by the EV in the past.

This not only shows that the Tesla can be dealt with but also what kind of car you need in order to do so. Taking all that into account, what do you think the P90D model with its Ludicrous mode will bring to the table? 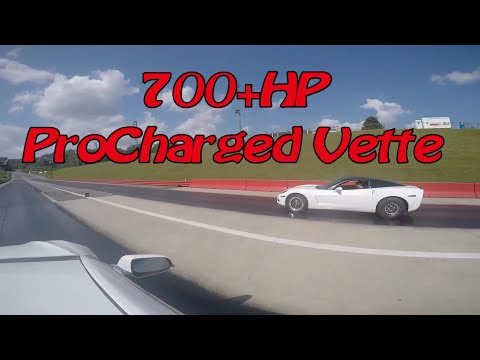