Elon Musk got everything sorted out with Tesla's Gigafactory, from staff recruitment to incentives from the state, but until now, we never got to see the plant, except for some digital renderings.
1 photo
Actually, a couple of month ago, we stubled upon a Tesla Gigafactory scale model that looked like a sci-fi keyboard. But now we have the real deal, captured in a 4k ultra HD video by a drone.

The Gigafactory construction site is located near Reno, Nevada and as we watched the video, the are suggests it is set up on another planet. Moreover, it's only after the drone flies around the area for a few times when you realize how prominent Tesla's facility will be once finished.

The scale is deceptive, but don't take our word for it. Just look at the machinery scattered around the behemoth structure and try to imagine how small a person is compared to the entire building.

At this stage, it looks like a huge depot, but once the construction is complete, the factory will become the world's largest lithium-ion battery plant. It's also a strategic addition to the Tesla empire, as the company looks to cut battery costs by at least 30 percent.

Also, by 2020, the Gigafactory is expected to add a working force of 6,500 employees who will help the plant reach an output of at least 500,000 battery packs every year. For this goal, Elon Musk's company teamed up with Panasonic, which also put a $1 billion investment on the table, along with battery-building know-how and tech.

As far as we can tell, this is the first aerial video of Tesla's upcoming Gigafactory, so make sure you watch it in 4k resolution for a boost of awesomeness. 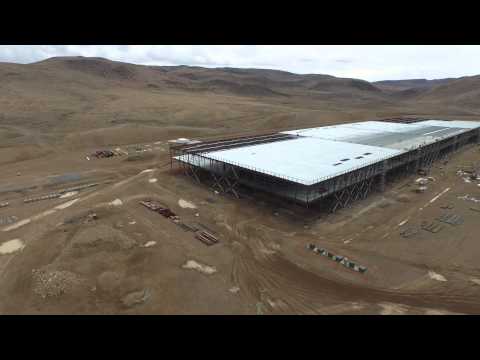