2 Consumer Reports: Tesla Model Y Is an Improved Model 3 Still Has Issues Though

4 Is This the First Side-by-Side Shot of Tesla Model Y and Ford Mustang Mach-E?

Twin Jet-Powered Canoe Sounds Like a Warbird Taking Off

We have gotten used to seeing so many Teslas hitting the official and unofficial drag tracks that some might have forgotten the California-based EV company also makes crossovers. These are not exactly your typical SUVs, but with great power also comes great AWD responsibility.
12 photos

North Carolina-dwelling Brian Jenkins is behind the i1Tesla YouTube channel and he decided to go down the off-road path. He already started to amend his Model Y with an emphasis on the “trails and fun” performance, and now it is time to see the initial result. He says the custom build is intended for both off-roading and overlanding, so the modifications are thorough.

On the other hand, you should not expect bigger than life adventures from this video (embedded below). At least not right now. This is mostly because the owner explains his Model Y is a work in progress, and he just wanted to see how things went so far within a real trail environment.

So, the action is rather on the light side of things – which is better for us because we have time to admire both the scenery and the olive-green Tesla dipping its toes for the first time in the wilderness.

By the way, that is not some kind of new custom paint from Tesla. Instead, this Model Y was enveloped in a rugged “Combat Green” vinyl wrap by someone named Avery. We like the subtle shade that goes against some of the Model Y builds we have seen so far. It even has custom touches, such as the Tesla lettering and the channel’s name imprinted on the hood. Nothing too in-your-face, though.

What you will notice from the get-go is the MountainPass Performance four-inch suspension lift kit. It is accompanied by a posh set of black 19-inch TSW alloys wrapped in 255/55 rubber (A/T III Toyo Tires). The titanium lug nuts also look highly appropriate during this stage of the build, along with the custom roof rack complete with an LED light bar.

As far as we can tell the only interior modification done so far has to do with the addition of a Taptes tConsole that allows the mounting of an iPad mini (4/5) or a smartphone. Interestingly enough, the product was designed by none other than Jenkins himself, according to the site's description. 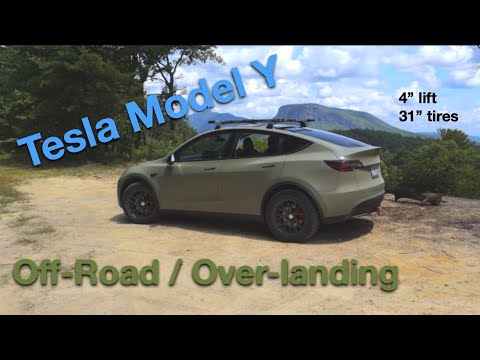