Watching this test got us thinking: what was the first-ever all-wheel-drive electric vehicle? Well, a little bit of research reveals that, like most other EV firsts, it didn't happen during this century. Nor the previous one.
5 photos

Yeah, we tend to forget electric vehicles go way back, and the only reason we even got to have the internal combustion engine was the rudimentary battery technology they had in the late 1890s. Otherwise, the electric propulsion would have likely stuck as it offers so many advantages over burning hydrocarbons it would have made no sense not to.

Anyway, it's never too late, we guess, and it looks like the EVs are finally going to catch up over the next few years thanks to the lithium-ion battery, and whatever technology somebody who's going to get very rich off it will come up with in the future.

The number of electric models on the market is growing each month while making electric concept cars has become the norm rather than the exception. Countries are rushing to announce sales bans on vehicles using internal combustion engines starting as soon as 2030 and certain brands that used to make conventional vehicles have now shifted completely toward EVs. The automotive world is changing, and despite some manufacturers still stubbornly pushing for hydrogen fuel cells, there seems to be no turning back.

Well, if EV is the way of the future, some people who live in cold climates where it snows a lot or in places where there aren't that many paved roads would like to know one thing: are all-wheel-drive systems on electric vehicles any good? Will they provide the traction necessary to get out of a hairy situation?

Testing one vehicle isn't going to answer that, but it should give an idea about how the system works. Unlike regular cars that use only one engine and rely on the transmission to send power to all four wheels, AWD EVs come with two (or more) motors, each powering one of the two axles. That means permanent AWD is a given, but also ensures infinitely more accurate control over how much of that instant torque is sent to any of the four wheels. At least in theory.

To test that, The Fast Lane Car YouTube channel took a Tesla Model Y Dual Motor and put it to the slip test - lifting various wheel combinations on rollers to see whether the vehicle can get enough power to the wheels (or wheel) left touching the ground. A good result sees the car moving forward, an excellent one does it with minimum wheel spin - or none at all.

The Model Y starts off great. Leaving the two rear wheels on the ground makes no difference as the electric crossover inches forward instantly. Reversing the axles and things slow down a bit, confirming the rear-wheel-drive bias suggested by the size of the two motors (more powerful at the back).

Predictably, lifting three wheels makes things even more difficult, but when the free wheel is at the rear, it's not enough to stop the Tesla from moving forward. Switch it to the front and it's the first situation the Model Y doesn't have a solution for. Kind of disappointing, but a good overall result. For a bit more details, you can watch the entire test in the clip below. 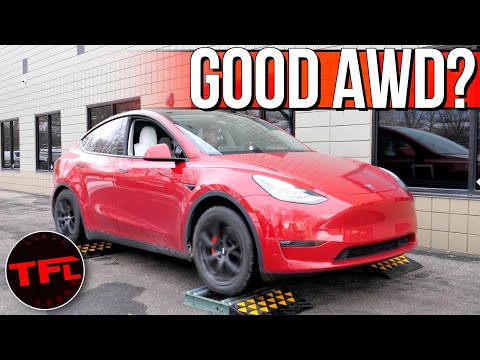