Mitsubishi Wants You to Carpool With Other People, Patents a New Social Credit System

When it comes to straight-line shenanigans, the Model X Plaid is the quickest sport utility vehicle that money can buy. The all-electric SUV in the featured clip is the older Performance with the Raven dual-motor powertrain, which still is incredibly quick off the line. Both variants, however, can’t match combustion-engined utilities in terms of speed.
11 photos

The German challenger is the second heaviest car at 5,181 pounds (2,350 kilograms), but it’s also the pokiest of the lot. Brabus can extract 838 horsepower and a simply ridiculous 1,070 pound-feet (1,450 Nm) of torque, but nevertheless, there is a problem with putting all those resources down to the ground. The AMG Speedshift Plus 7G-Tronic automatic transmission also happens to be slower on upshifts than the ZF 8HP tranny in the Urus.

As the lightest car in this quarter-mile showdown, the Lambo is certain to put up a good fight. Tipping the scales at 4,844 pounds (2,197 kilograms), the Urus is the least powerful of the lot as well. Its twin-turbo V8 engine produces 641 ponies and 627 pound-feet (850 Nm), but on the other hand, Volkswagen Group-developed launch control systems are deemed good by many.

Not surprising anyone, the Lambo claws in better than the Brabus. Mat puts a small gap between the Model X Performance and Yianni Charalambous in the Urus, and just as expected, the Italian utility vehicle slowly decreases the gap. The finish line is eventually crossed in 11.9 and 12 seconds. As for the modified GLE 63 S Coupe, 12.8 seconds in the rain isn’t really bad.

The Brabus-tuned AMG takes revenge from a roll, a scenario that favors the immense torque of that incredible powerplant. Be that as it may, the Model X Performance crosses the half-mile finish line ahead of the GLE Coupe.

Finally, the emergency brake test concludes with a clear victory for the Urus. The Model X settles for second place, and the Brabus is dead last. 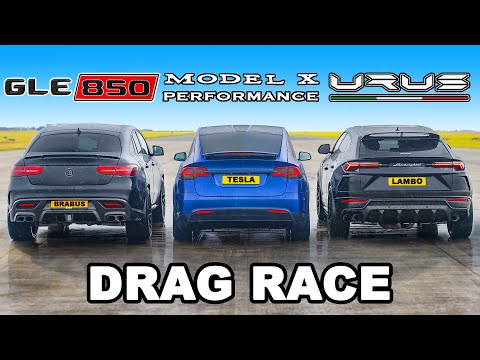