3 New Land Rover Defender Breaks Down After Only 167 Miles

Vlad Mitrache
We're not going to lie, there is a weird lineup for this test, but that can only make it all the more interesting. There is a total of eight SUVs, though one of them is there just to stay in shape and show everyone how it's done. Well, that was the plan, at least.
17 photos

The first one up the hill is also the feeblest of the lot. That's no coincidence: the organizers decided to roll the vehicles out in an ascending order based on their maximum torque output. With the 240 lb-ft/325 Nm produced by its 3.5-liter gasoline engine, the 2019 Nissan Murano had the honor of cutting the ribbon for this off-road hill climb.

It didn't cut the ribbon on top as well, though, since the Japanese SUV became stuck at only the second obstacle, after barely managing to get over the first. A message on the dashboard informs the driver the 4WD system is overheating. A second attempt with the traction control switched off doesn't yield a better result, and since the cooling problem persisted, the Nissan had to bow out after only clearing one obstacle.

The second one is the 2019 Volkswagen Touareg. The reason it sits so low on the starting grid is that it's equipped with a tiny 2.0-liter turbocharged gasoline engine producing 273 lb-ft/370 Nm. However, that doesn't keep the VW from putting on a very convincing display with minimal wheelspin all the way to the top. The driver engages the Off-Road mode for a second climb that goes even smoother.

Third is an old 2013 Mercedes-Benz ML 350 that should have been second based on the torque produced by its 3.5-liter engine - 250 lb-ft/340 Nm - but managed to lose that spot to the impressive Volkswagen Touareg. The older Merc doesn't start great as it needs a bit of time to get over the first obstacle. The traction control system needs a while to kick in.

After the slow start, it makes its way up the hill in a convincing enough manner, though it's far from the much cleaner execution of the VW. A second climb with the Off-Road mode engaged shortens the gap, but the M-Class is still behind.

It's only fitting that next we get to see what six years of evolution did for Mercedes-Benz as the 2019 GLE 450 takes the stage. It has a whopping (compared to its predecessors) 369 lb-ft/500 Nm of torque from a 3.0-liter turbocharged engine, but even so, it gets stuck as quickly as that second obstacle that stopped the Nissan Murano for good.

However, the Mercedes has an ace up its sleeve: it can engage Off-Road mode. Once the driver does that, not only does the GLE450 continue its climb, but it does it just as aptly as the Volkswagen Touareg.

Up next is the GLE-Class' fiercest rival: the BMW X5. This particular one is also a bit old as it's a 2014 model equipped with a 4.4-liter turbocharged V8 good for 480 lb-ft/650 Nm of torque. The xDrive system proves its worth once again as the BMW gets to the top with minimum fuss.

It's time for the 2016 Tesla Model X P90D to put its 484 lb-ft/657 Nm of torque to work. With the air suspension in its highest setting, the electric SUV ventures on... only to come to a halt at that dreaded second obstacle. A second attempt at it doesn't cut it, so the X takes an easier line (essentially goes around it). As it continues its climb to the top, a pattern clearly emerges: the electronics allow a little wheelspin before they kick in and push the vehicle forward.

Sensing there is more to be had from Tesla's SUV, the driver alters the settings a little: acceleration from "Chill" to "Standard", steering from "Sport" to "Comfort", and regen braking from "Standard" to "Low". With these in place, it goes over the second obstacle with minimum fuss and puts on a much more honorable performance altogether.

Finally, it's time for the king of the hill - well, a slightly older one: the 2017 Mercedes-AMG G 63. It has a huge 5.5-liter V8 turbo with 560 lb-ft/760 Nm and... Michelin Pilot Sport tires. To be fair, all other contestants so far have also worn street tires, but the Pilot Sports are a bit next level in terms of how unfitted they are for off-roading.

It matters not as the very long suspension travel means that, unlike the other vehicles here that often only had two or three wheels in contact with the ground, the G-Wagen is able to keep all four of them touching the soil for the most part. The G 63 only shows a fraction of wheelspin at the last obstacle. But that was in normal mode. With the low range and two of its three lockable differentials engaged (center and rear), it pulls off a 100 percent clean climb.

There's also a 2008 Toyota FJ Cruiser in there running on Goodyear Wrangler DuraTrac tires. Obviously, it has no problem dealing with the task at hand but it's remarkable to see just how different its climb is compared to the G63's. The Toyota is nowhere near as clinical as the German SUV throwing lots of dirt around and making a big fuss about it.

So, apart from the poor Nissan Murano and the Mercedes-Benz GLE-Class without the Off-Road mode activated, all vehicles were able to clear the course with more or less ease. If there's anything worth pointing out here is just how important electronics have become in dealing with rough terrain. Without the right settings, some of them were dead stuck. That doesn't mean there's anything wrong with a good set of off-road tires and a mechanical locking differential. Or two. Or three. 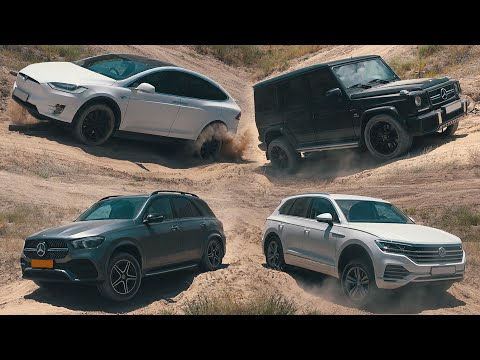