1 Shelby GT500 Races the TFL Ram TRX, Result Is Not What You Would Expect

Tesla Model S Races LSX-Powered BMW E46, You Are Not Going to Believe Who Won

Although the "Hoonicorn vs. the World" mini-series has ended, for now, the Hoonigan media machine is still teasing us with content from its newly-found dragstrip. And the most recent installment of the "This vs. that" series features a Tesla Model S and a drift-spec, LSX-powered BMW E46. After all the races we've seen in recent years between Teslas and ICE vehicles, we could already imagine the outcome of this battle.
26 photos

But before jumping to conclusions, let's do what any rational person would and analyze both vehicles for a bit. On the one hand, we've got Formula Drift Pro2 driver Micah and his insanely loud BMW 3 series. As you would expect from a pro drift spec vehicle, this car is now powered by a massive 6.9-liter LSX engine, which makes 620 horsepower to the wheels! That is about 730 horsepower at the crank! That's what you get from a 14:1 compression ratio.

Micah's BMW weighs next to nothing at 2,900 lbs (1,315 kg) and uses a 4-speed dog box transmission. Now, while drift cars aren't particularly fast in a straight line, at least not when you compare them to a car that was built with drag racing in mind, you have to wonder what the LSX is capable of doing in the right hands. One of the crew members describes the noise simply as "Well, I don't have eardrums anymore."

It seems only fair that the opponent of the loudest car in that particular point in space is the most silent one around, as it uses electric power to drive the rear wheels. The 2012 Tesla Model S P85+ is driven by Matthew, who got tired of daily driving a 240SX for ten years due to constant mechanical issues and made the switch to an EV just recently. The P85+ comes with 500 horsepower and a single-speed reduction gear, but it weighs 4,500 lbs (2,041 kg).

Even if the Tesla is heavier and not as powerful as the BMW, the way the power is delivered in an EV and the instant torque should make up for it, or at least that's what we thought at first. The two drivers line up for three rounds in a quest to determine a winner. The first race is set for a distance of 1,000 feet (304 m). Predictions before the race have three people betting on the Tesla and just two on the BMW. The guys even tease Micah by asking if he's ever drag raced before, and he answers that: "I've launched my mom's 2006 Subaru STI once".

Micah launches his BMW perfectly and gets in front from the very beginning, ultimately winning the race by a few car lengths. Up next, they go for a shorter 500 feet (152 m) race. The Tesla launches first, and it seems that the BMW isn't as efficient in delivering the power as it was on the first run; ultimately, the EV gets the win. They then get ready for a head to head run on the final race. Micah makes use of a clutch kick to get things moving, and by the end of the run, he wins the challenge, leaving everyone surprised at the result. 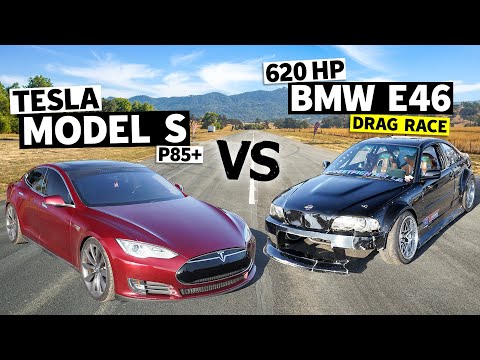